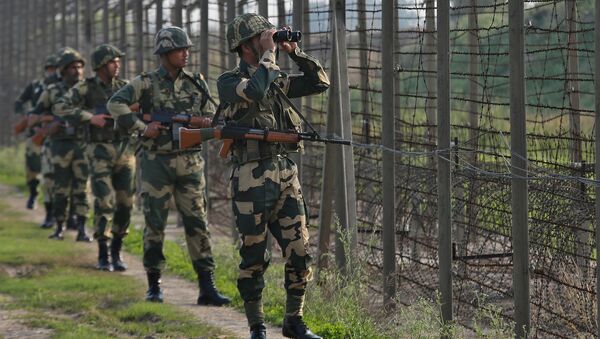 On Tuesday, India bombed a terrorist camp in the Pakistani-controlled part of Kashmir, violating the neighbouring country's airspace. Already-tense bilateral relations have been escalating between the two Asian nuclear powers after mid-February's suicide attack, which left over 40 Indian paramilitary troops dead.

The spokesperson of the Indian Foreign Ministry stated that Pakistan's jet was shot down in the air incident over Kashmir, while New Delhi lost one MiG-21.

The Indian official has confirmed that one pilot "is missing in action," adding that "Pakistan has claimed that he is in their custody. We are ascertaining the facts."

Earlier in the day, Pakistan's army press service stated that its combat jets shot down two Indian Air Force aircraft that had allegedly violated Pakistani airspace over Kashmir, ANI reported. The strikes were carried out from the Indian-controlled state of Jammu and Kashmir; there has been no information on casualties resulting from the incident so far.

Two Indian pilots have been captured, with one of them needing medical assistance, the Pakistani military added.

Pakistan's fighter jets were forced to return to their side of the de facto border of the disputed territory after responding to the violation of Pakistani airspace, AFP reported, citing sources and local media.

The Pakistani Foreign Ministry said Wednesday that the airstrikes on the Indian jets were conducted in attempt to demonstrate a readiness to engage in self-defence.

"Today, Pakistan Air Force undertook strikes across the Line of Control from within Pakistani airspace. This was not a retaliation to continued Indian belligerence. Pakistan has therefore, taken strikes at non military target, avoiding human loss and collateral damage, the sole purpose being to demonstrate our right, will and capability for self defence," the ministry said in a statement.

Air services have been temporarily halted in several districts of India's Jammu and Kashmir state, a representative of the Srinagar airport told Sputnik Wednesday.

The crisis comes just a day after India carried out an aerial operation, targeting a Jaish-e-Mohammad terrorist group camp,  which claimed responsibility for the deadly terrorist attack against the Indian security convoy on February 14. The camp was situated in the Pakistani-controlled part of the Kashmir region, while Islamabad accused New Delhi of violating its airspace.

While India stressed that it conducted the raid due to "Pakistan's inability to take action to destroy terrorist infrastructure," the Pakistani National Security Council reportedly rejected the claims that the airstrike targeted terrorists. At the same time, Pakistan's Foreign Ministry stated that it considers the Indian move an "act of aggression," which threatens regional security and vowed a response.

Pakistan's Nuclear Arsenal Body Set to Meet in the Wake of Indian Air Strike
After February's terrorist attack, which left over 40 Indian paramilitary troops dead, the already-strained relations between India and Pakistan deteriorated even further. India blamed Pakistan for harbouring the terrorists responsible for the attack,and accused Islamabad of having a "direct hand" in the incident.

Pakistan in turn, rejected the allegations of its involvement in the attack and said that this was India's strategy to divert international attention from alleged human rights violations in the Kashmir region.