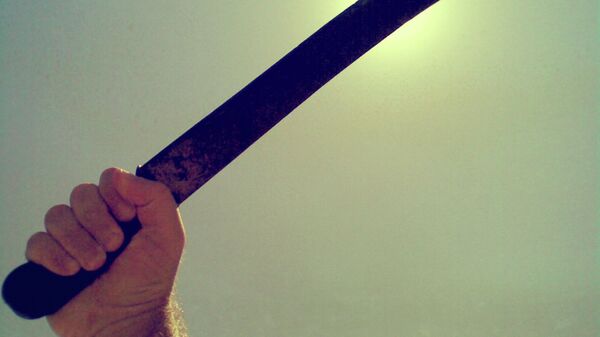 An Israeli man in the Brazilian city of Morro de São Paulo suffered serious wounds to his hand after being attacked by a hotel employee swinging a machete last week.

The city, which is on the northeastern tip of Brazil's Tinharé Island, is a popular tourist destination for young Israelis, according to Yisrael Hayom.

According to the victim, whose name is being withheld, he was urinating in a corner by the hotel when he was suddenly hit in the face by a chair.

"I was on the promenade, and I bought food. There are no bathrooms nearby, so I found a quiet corner that is not connected to the hotel, just a quiet corner with grass, to do my business. Suddenly, a worker at a nearby hotel ran up to me with a chair, and hit me in the face with the chair and cut open my lip. I did not know what to do. I defended myself. When I managed to neutralize him, I asked him to stop and I asked, ‘What's wrong?'" the victim told the news outlet.

However, the hotel employee didn't answer and was instead joined by two other locals, who continued beating the traveler.

"I managed to get away from them and fled to a nearby area where there were Israelis. I called them, and told them that locals beat me. They saw that I was all bloodied and accompanied me back," the victim added.

When the Israeli traveler returned to the hotel area where his friends were waiting for him, the hotel employee who had first attacked him was there as well.

"I couldn't really see him. I saw similarities, but then I realized it was him. In seconds there was another fight. The Israelis were behind me, and I heard one of them shouting, 'Be careful! He has a machete!' I didn't have time to react before he swung it. He cut me very badly, tearing all my flesh, and I was soaked with blood," he said, describing how his palm got cut by the machete.

When the hotel worker realized that he had injured the tourist, he fled the scene of the attack. The tourist attempted to get treatment at a local health clinic, but was turned away due to the severity of the injury.

"We got to a local health clinic, but they were unable to take care of me and sent me to the hospital. For many hours I had only amateur bandaging, and it was six hours before I was treated by a hospital. Today, a few days after the incident, I am here in Brazil, resting and feeling a little better. It was a miracle that I did not lose my hand. I should emphasize that there were also locals who helped me get medical treatment."

According to Yisrael Hayom, the hotel worker was arrested after the incident but was released shortly thereafter. It is unclear if any charges were pressed against him.