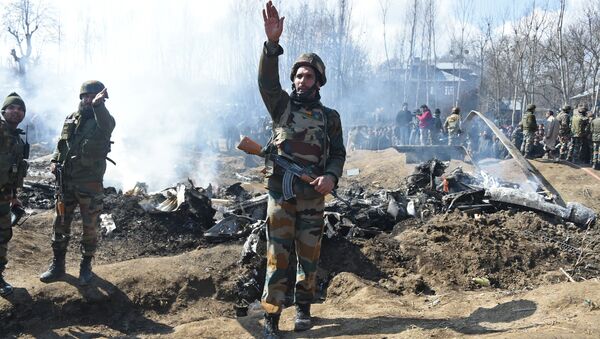 NEW DELHI (Sputnik) - New Delhi calls on Islamabad to immediately release and return to homeland the Indian pilot arrested by the Pakistani Army following the aerial incident over the disputed Kashmir region, the Indian Foreign Ministry said on Wednesday.

"India also strongly objected to Pakistan’s vulgar display of injured personnel of the Indian Air Force in violation of all norms of International Humanitarian Law and the Geneva Convention. It was made clear that Pakistan would be well advised to ensure that no harm comes to the Indian defence personnel in its custody. India also expects his immediate and safe return," the statement said.

Earlier in the day, the Indian Foreign Ministry said a Pakistani jet was shot down in the aerial incident over the disputed Kashmir region, adding that India also lost one Mig-21 aircraft. The Pakistani army said it had downed two Indian jets that crossed the so-called Line of Control (LoC) separating the Indian-and Pakistani-controlled parts of Jammu and Kashmir and arrested two pilots. The injured one was sent to a hospital and receiving necessary medical help, while the other pilot is in custody, according to the Pakistani military.

The day before, the Indian Air Force carried out an airstrike against what they claimed was a camp of Jaish-e-Mohammad group, considered terrorist by India, which was located across the LoC. The Pakistani Foreign Ministry has slammed the airstrike as a violation of its territorial integrity and sovereignty.