'Trigger-Happy' Elements in India & Pakistan May Ratchet Conflict Up – Activist 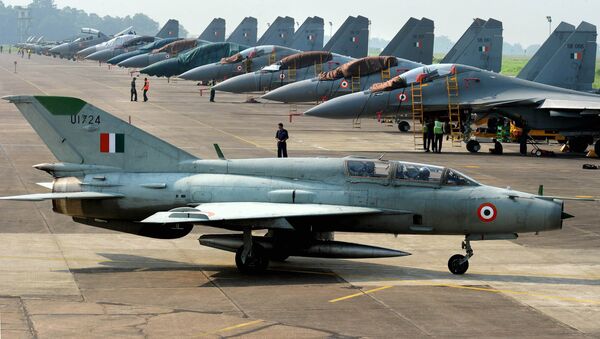 On 27 February, Pakistan said it had shot down two Indian jet fighters over the disputed region of Kashmir. Speaking to Sputnik, Najam U Din, former director of the Human Rights Commission of Pakistan (HRCP) and a human rights activist, shared his views on the escalation of tensions between the two nuclear powers.

The recent Indian-Pakistani aerial escalation should be solved in a civilised manner while the use of military assets may further escalate tensions, Najam U Din,  former director of the Human Rights Commission of Pakistan (HRCP) and a human rights activist, told Sputnik, commenting on the downing of Indian aircraft by the Pakistani military over Kashmir.

"The current standoff is most unfortunate," Din said. "Both countries have much more pressing issues to attend to than rattling their sabres and advocating restraint alternatively. That use of military assets will only escalate things a push the other side to respond is much more obvious this morning than before".

According to the human rights activist, by ratcheting tensions up the two countries will prolong the conflict until "things get out of hand".

"These are times when nations need statesmen," he opined. "Unfortunately, on both sides there are trigger-happy elements that would do much to avoid losing face in front of their domestic audience".

India-Pakistan: Tension Increasing Between Nuclear-Armed Neighbours - Scholar
On 27 February, the Pakistani Armed Forces reported that they had shot down two Indian fighter jets that allegedly crossed the Line of Control (LoC) over the disputed Kashmir region and violated Pakistani airspace. The Indian Foreign Ministry acknowledged that the country lost one MiG-21 warplane adding that the pilot had gone missing. It further specified that a Pakistani aircraft was also downed in an air incident. For its part, Islamabad denied that any of its jets were struck and said that it managed to capture two Indian pilots.

"Another thing that should be understood is the omnipresent potential for tensions exploding without the Kashmir issue being tackled through discussions," Din suggested. "The general fear is that Kashmir will again be lost sight of and the immediate standoff will come to dominate everything and hopefully when things settle down soon. It would again the same pretence on Kashmir. Until the next trigger happens".

He emphasised that "the only way forward for both sides is to discuss all issues in a civilised manner".

Following the aerial incident Pakistani Prime Minister Imran Khan signalled his willingness to "sit down and talk" the situation through.

"We didn't take action earlier without assessing our own damage from Indian airstrikes because we wanted a justified response. Two Indian MiGs that entered Pakistani airspace today after our retaliation were shot down," Khan said on 27 February.

Taliban Rubbishes Reuters' Report About Reaction to India-Pakistan Escalation
Tensions escalated on 14 February when Jaish-e-Mohammad (JeM), a Pakistan-based Islamist terrorist group, attacked an Indian security convoy in an India-controlled part of Kashmir, killing 45 Indian paramilitary officers. The assault is the biggest terrorist act in India since 2008.

In response, the Indian Air Force (IAF) launched a retaliation mission on 26 February targeting the terrorist group's positions within the territory of Pakistan. According to the India's Ministry of External Affairs, the air raid was a "non-military" pre-emptive move. However, the action was qualified by Islamabad as "an act of aggression" threatening Pakistan's national security.

JeM was founded by Pakistani Muslim cleric Masood Azhar in 2000 and has been blamed by New Delhi for terrorist attacks on the territory of India since 2001. India and Pakistan have been involved in three wars and military standoffs over Kashmir since the partition of British India in 1947.