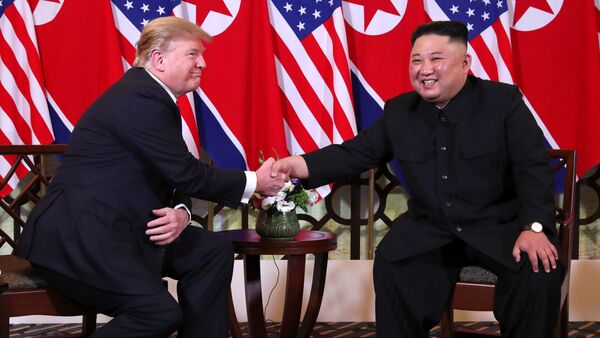 As the first day of negotiations between US President Donald Trump and North Korean leader Kim Jong Un wound to a close in Hanoi, both leaders struck a positive note about the possibility of real progress being made toward denuclearization and peace on the Korean Peninsula. Sputnik correspondent Brian Becker reported live Wednesday from Vietnam.

Becker, who co-hosts Radio Sputnik's Loud and Clear with John Kiriakou, said there are rumors swirling that Trump and Kim may end this summit with an end-of-war declaration. "There could be real, measurable progress" through this summit, including more specific steps to confirm denuclearization processes, he said.

​The Democratic People's Republic of Korea (North Korea) and Republic of Korea (South Korea) formed separate countries in 1949 as the battle lines of the Cold War were drawn around the world, and the Soviet-allied socialist government in the north and US-allied capitalist government in the south slowly slid into civil war, which became an international conflict in 1950. While over 3.5 million died in the war, the vast majority of them Koreans, no peace treaty concluded the fighting in 1953, only a ceasefire that established a heavily fortified demilitarized zone between the two Koreas. Since then, the US has garrisoned tens of thousands of soldiers in South Korea, and the DPRK has made self-defense the center of its diplomacy and politics, to which end it detonated its first nuclear weapon in 2006.

Now, however, both an end to the war and to the DPRK's nuclear program hang in the balance of negotiations between Trump and Kim, after years of bluster and brinksmanship failed to produce any results.

Trump and Kim traded compliments Wednesday over dinner discussions as they were joined by their advisers.

"I think you will have a tremendous future for your country; you're a great leader," Trump told Kim. "We will help it to happen." The two leaders met previously in Singapore in June 2018, with this summit as a followup to that after progress toward its goals stalled.

"I hope that we can achieve a result that everyone will welcome. I'm convinced that we can do it," Kim said, who has led the DPRK since 2011.

Becker told Loud and Clear, "If there is not a peace treaty, per se, but a declaration signed by Kim Jong Un and President Trump announced that, declaring, in fact, that the war between the US and North Korea is over — that would be very large. Large because it speaks to what, for North Korea, is the precondition — and it would only be logical that it would be the precondition — for any kind of denuclearization process that would ensue. Nobody would expect another country to disarm itself while in the middle of a war, so if the US wants North Korea to begin the process of denuclearization, it has to end the war that began almost 69 years ago. So that is, in fact, a precondition."

"So that's the rumor. There may be other important parts to this meeting though, which would be a schedule for what comes next, after the declaration. What steps does North Korea need to take, or does the United States need to take, to show that denuclearization, or some sort of disarmament mechanism, is in motion on the Korean Peninsula?"

The summit began with a dinner attended by Kim, Trump, and the major negotiators from both nations. "All over Hanoi's TV today and tonight, images of this dinner were shown," Becker said.

"You can feel a suspense building here in Hanoi, because even though there's been so many naysayers that this isn't going to work, this is just platitudes — in fact there could be real, measurable progress."

The White House has been dangling as a carrot the possibility of helping North Korea develop into a thriving economy. The president is right in this case, Becker noted. "We can see that Vietnam, once unified, has taken off economically. There's great human resource potential in both South and North Korea: an industrious population, well-educated — if unified, yeah, it could be a real economic powerhouse."

"What's odd is to have this coming from the mouth of an American head of state, because it goes completely against the sort of basic thesis that North Korea is a basketcase economically and must always be an economic basketcase because it's led by a socialist government or a communist party-led government. So in many ways Donald Trump, whether he knows it or not, is breaking a lot of the Washington taboos about how you're supposed to talk about North Korea. But could it be an economic powerhouse? Yes, I think it certainly could."

Becker said he interviewed Christine Ahn, one of the founders of the Korea Policy Institute and the executive director of Women Cross DMZ, an exchange that is included in the Radio Sputnik interview above.

Becker asked Ahn about how this was different from past times it seemed an end to the Korean War was near, such as late in US President Bill Clinton's administration. "What gives a guarantee that [this attempt] won't be short-lived?"

"It's going to absolutely take a ratified agreement," Ahn told Becker. "I think that's where it's going to be vital to have members of Congress, and especially progressive Democrats who see the historic opportunity that we're in."

"The good news is that there's a congressional resolution that has been introduced today in Washington, DC, by Congressman Ro Khanna, who was the leader in stopping the US war on Yemen, and [Representatives] Ro Khanna, Barbara Lee and Andy Kim, who is the first Korean-American Democrat [to be elected to Congress], I think, and so many women members of Congress," she said, noting the much-lauded progressive freshmen female congresswomen backing the bill.

"This is a significant move, I think, to prevent, when Trump comes home with this peace agreement or declaration of peace, that it won't be scuttled by the Democrats," she said, citing past examples of similar efforts by US heads of state that were scuttled by opposition-controlled Congresses. "Hopefully we'll be able to counter that with some progressive Democrats that say ‘Wait a minute, this is bigger than partisan politics, this is nine out of 10 South Koreans, our key ally in the region, that wants to end this war, that wants peace.' This is good for America. If we ever want to see the kinds of things that this new Congress wants to achieve — Medicare for All, New Green Deal, free college tuition — we must address the military budget, the $700 billion we spend annually."

If an end of war declaration "is not done congressionally, if it's not codified with congressional action, it can be easily reversed," Becker noted. "People around the United States who care about peace, who want the two Koreas to be able to live in peace, who think the Korean War should come to an end… they should swing into action right now to support these kind of efforts to demand that the US government end this war," Becker said.

"The problem isn't in Pyongyang, and it's not in Seoul. The problem has been in Washington. So we, the people in the United States, we need to do something about it."

"For a long time, people said you could never end the Vietnam War," Becker told Kiriakou. "That's what I heard the whole time that I was growing up. ‘If we end the war in Vietnam, it'll be a bloodbath, it'll be a catastrophe, the sky will fall.' Guess what: when the war ended, the war ended, and peace came, and Vietnam stopped suffering, it stopped bleeding. We have to reject these kind of notions that are repeated over and over again ad nauseum by the establishment who want to wreck the prospects of peace. They might want to wreck it because it's Donald Trump who's driving it; they might want to wreck it because it defunds or takes away the pretext for the military-industrial complex — whatever the reason is, they're bad reasons, and we have to reject it."

"Can peace come to Korea? Well yes, it can. It came in Vietnam. The United States fought a longer war with Vietnam; 58,000 Americans died, 2 million Vietnamese died, and yet the United States is at peace with Vietnam — why can't it be true for Korea as well?"