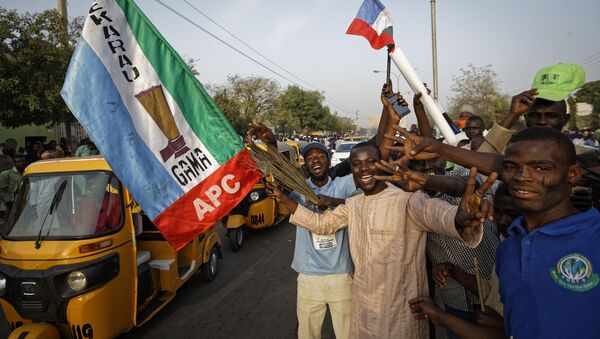 © AP Photo
Subscribe
In 1983 Major-General Muhammadu Buhari came to power after a military coup, only to be ousted two years later. But he was elected President of Nigeria in 2015. Sputnik spoke to Aderemi Ojekunle, a journalist in south-west Nigeria, about the challenges facing the country.

With millions of votes still to count after elections in Nigeria on Saturday, 23 February, President Muhammadu Buhari has a comfortable lead and looks set to win a second term.

The full result is not expected to be completed until Wednesday, 27 February and some commentators say it is still too close to call.

Voters are also choosing who they want to sit in the Senate and the House of Representatives with the two biggest parties — the All Progressives Congress (APC) of Mr. Buhari and the People's Democratic Party (PDP) of Mr. Abubakar — expected to dominate both houses. 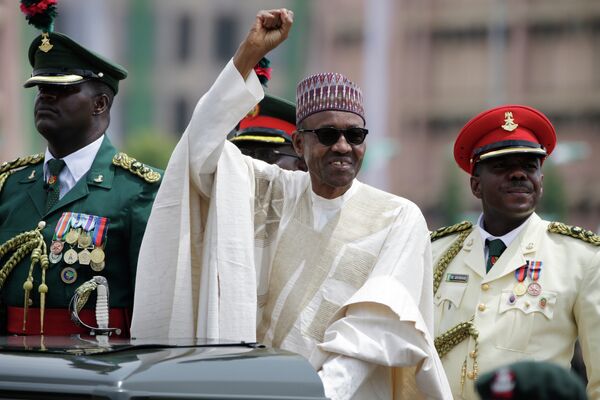 Aderemi Ojekunle, a journalist in south-west Nigeria, said the majority of voters live in northern Nigeria, which is why a northern candidate tends to do well.

Buhari is from Katsina state in the north, while Abubakar is from Northeastern state, which borders Cameroon.

"The outlook favours President Buhari because of his northern influence and that is where the majority of votes come from. In the southwest, the votes will be largely shared among the two leading candidates. In the southeast Atiku may carry the day due to running mate's influence in the region," Mr. Ojekunle told Sputnik. 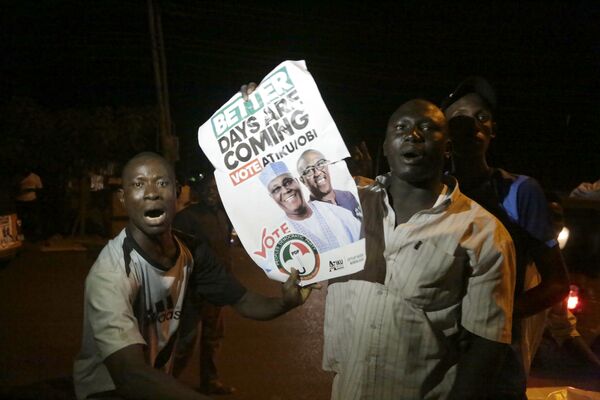 Supporters of Atiku Abubakar demonstrate on the streets of Yola, Nigeria
© AP Photo

Abubakar's running mate is Peter Obi, a popular former governor of Anambra state and a key representative of the Igbo tribe.

So what has President Buhari achieved in the last four years?

"Buhari has put touches to some abandoned infrastructures such as roads and kick-starting some rail projects across the country. This is his core achievement," Mr. Ojekunle told Sputnik.

He said the ideological differences between the APC and the PDP were not great.

"While the APC clamour for the status quo and not-a-too clear economic direction, the PDP candidate, Atiku Abubakar is pushing for privatisation of state's resources," Mr. Ojekunle told Sputnik.

He said the two biggest problems for the country's next president were unemployment and sluggish economic growth.

"Nigerians will be expecting a more radical approach to economic directions and measures that will lift the nation out of growing poverty in the midst of population explosion," Mr. Ojekunle told Sputnik.

There are 190 million people in Nigeria — Africa's most populous country — and that number continues to rise.

He said whether the next President is Buhari or Abubakar, he needs to introduce "actionable policies" and programmes that will help the Nigerian economy and give the people prosperity.

No woman has ever won election for the office of the president in Nigeria and very few members of the Senate or the House of Representatives are women.

"Culture is a major factor in Nigeria but I think the dynamics are changing for women," Mr. Ojekunle told Sputnik.

Buhari is a former army officer who took power after a coup in 1983 which ousted democratically elected President Shehu Shagari.

But Nigeria has not had a coup since 1985 — when Major General Ibrahim Babangida ousted Buhari.