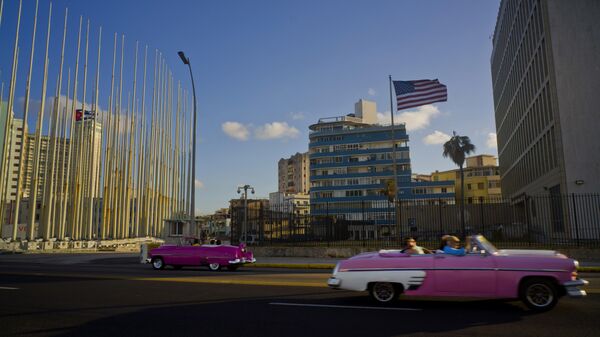 ​The new Cuban constitution will introduce limits preventing presidents from serving more than two five-year terms and will recognize private property. The existing Cuban constitution has been in force since 1976 but has already undergone certain changes, with amendments having been adopted in 1978, 1992 and 2002, Sputnik previously reported.

​Arnold August, a lecturer, journalist and author of the book "Cuba-US Relations: Obama and Beyond" joined Radio Sputnik's Loud & Clear Tuesday to discuss the updated constitution.

"There are several reasons, but the main reason is that, on the one hand, Cuba, as everyone knows, is well publicized," August told hosts John Kiriakou and Walter Smolarek when asked why the country's constitution needed to be updated.

"Cuba has been making important changes to its economic system, whereby the state has become increasingly decentralized and [is] opening up certain sections of the economy such as small enterprises, barber shops, restaurants, beauty parlours, etc., so that instead of the state having that onerous responsibility of trying to manage these very small enterprises, [they will be in the hands] of local entrepreneurs," August added.

"This has been developing over the years to the extent that well over 550,000 people are involved in one way or another in these private enterprises. What the constitution did was finally give a legal constitutional basis for this section of Cuban society, which did not exist before the approval of the constitution," August continued.

The new constitution replaces the 1976 document enacted under Fidel Castro, who governed Cuba as prime minister from 1959 to 1976 and then as president from 1976 to 2008.

"There was a lot of discussion to what extent Cuba should carry on toward the socialist path," August told Sputnik.

"And on that point, of course, it was indicated that people have the right to open up their own small private enterprises… the constitution also clearly spells out that the economy remains a socialist economy, where the main instruments of production, as well as health, education, military, remain in the hands of the state. People who open up a new enterprise [in Cuba] have to purchase a license, pay taxes to the state on their sales; they also have to pay sort of a tax charge on the people that they hire to work in their respective businesses."

"All of this money is funneled back into the economy, specifically to further improve the health system, education system, cultural, sports and other endeavors which are flourishing in Cuba," August explained.

In addition, according to August, when the first draft of the constitution was tabled back last July, the word "communism" was deleted from the document for the first time since 1976.

"This created a huge backlash, contrary to what the mainstream media would have thought," August noted.

"[Cubans] do not want to delete the word communism from [their] constitution. This gives the impression that they [Cubans] have given up on this ideal. The Cuban people, from the grassroots, [want to make sure there] was no notion abounding in Cuba or in the world that Cuba is another socialist-democratic country. It is a socialist country, always with the communist ideals," August explained.

In a statement Tuesday, US Secretary of State Mike Pompeo announced that the US does not consider Cuba's recent referendum on its new constitution democratic.

"While the regime claims Sunday's vote was democratic, Cuban authorities harassed and detained dozens of observers and peaceful protesters, confiscating phones and devices," Pompeo said. "Earlier this month, more than 120 activists initiated a hunger strike to send a message to the regime that the Cuban people reject these oppressive tactics. We strongly condemn these attempts to silence peaceful protests, which show that Cuba's leaders fear the Cuban people."

According to August, when the updated constitution was presented to the Cuban people, there had never been such a "lively, open debate on the future of Cuban society."

In a news conference in Havana on Monday, Cuban officials said that around 4 percent of the voting ballots were blank or invalid.

"When the vote took place, you had 87 percent of people participating in that vote. In some newspapers, they are trying to belittle this voter turnout of 87 percent," August explained, stating that mainstream media outlets were comparing this year's voter turnout to the one back in 1976, which had a 98 percent turnout.

"One cannot compare the 1976 situation, when Cuba was during very well and had close ties to the Soviet Union, to the current situation," August noted.