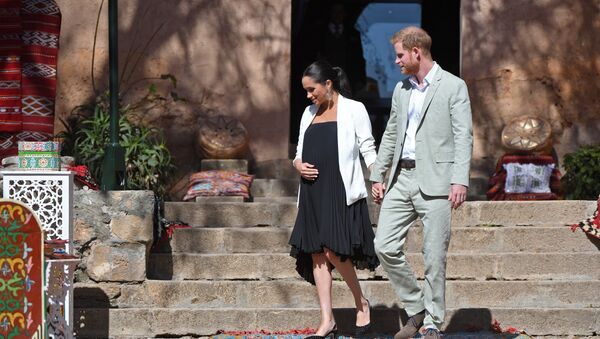 © AFP 2021 / FADEL SENNA
Subscribe
As the Duchess of Sussex's due date is getting closer, fans of the British royal family are all abuzz about the gender of the unborn royal child.

Prince Harry and Meghan Markle have been tight-lipped on this topic, but newsmongers have suggested that a princess is on the way after an alleged video from Markle's confected baby shower emerged online.

The clip, which was shared by Meg and Harry's Instagram fanpage, claims to be shot at New York's The Mark Hotel, where the $500,000 baby shower reportedly took place last week.

The footage hints that Baby Sussex will likely by a girl. The only proof, however, is the pastel-coloured décor of the desserts and the hashtag #girl on the video.

In October, when Kensington Palace announced Meghan's pregnancy, it said only that she was expecting "in the spring of 2019."

In mid-January, the newly minted duchess revealed that she was six months pregnant, which means that the baby could be due in late April. She also said that she and her husband were keeping the baby's gender a "surprise".

Nevertheless, bookies appeared to be convinced that Harry and Meghan would welcome a girl, and bets on the gender of the child have been suspended.

Katie Baylis, a spokeswoman for the world's largest online betting exchange, Betfair, said: "We haven't seen too much betting on this market for a while, but tonight all of a sudden we have seen a flurry of betting activity on the baby to a girl."

So much so that we've had to suspend the market and stop taking bets on the sex of the baby. If the punters are anything to go by, then we could have a new princess in a couple of months' time."