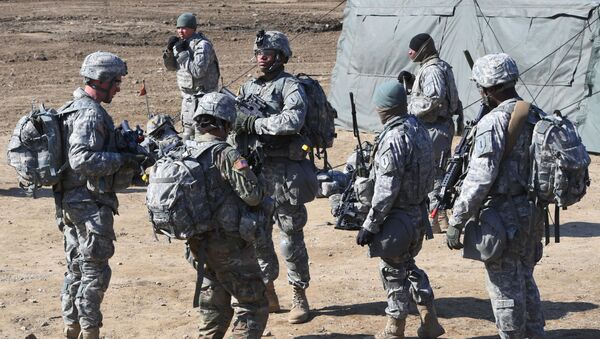 © AFP 2021 / JUNG Yeon-Je
Subscribe
The Iranian Islamic Revolutionary Guard Corps has announced that it was able to take control over US drones flying over Syria and Iraq and extract "first-hand" information from them.

Commander of the IRGC aerospace forces Amir Ali Hajizadeh said that “seven to eight drones that had constant flights over Syria and Iraq were brought under our control. We monitored their intelligence and we could gain their information first-hand".

Moreover, a video was published showing the Americans destroying an MQ-9 Reaper drone 10 km from their base, having learned about a third party taking control of the drone.

What does this indicate? Does it reveal the weakness of American intelligence or the power of Iran’s IRGC hackers, who are often mentioned in the US? Hassan Shemshadi, an Iranian military expert and war correspondent in Syria and Iraq, has told Sputnik that this case once again unveils the myth of the invulnerability, excellence and greatness of American military power.

“Despite the fact that Amir Ali Hajizadeh’s statement was made now, Iran has already conducted similar manoeuvres on several occasions", he said. In previous years, "when the US Air Force operated in the region (Syria, Iran and Afghanistan) and their spy drones were constantly manoeuvring close to Iran’s borders, specialists at the IRGC’s aerospace division meticulously monitored all the movements of these US drones and possessed complete and precise information on their routes, objectives and the nature of their intelligence activities", he continued.

IRGC General Vows to Defend Disputed Islands in the Gulf, Slams US Presence
The IRGC has decided to make those manoeuvres public in order to "show how false the US statements on the superiority of their supposedly un-hackable reconnaissance equipment, which [allegedly] cannot be seized or controlled by anyone, are", the military expert stressed.

Shemshadi recalled that a few years ago, Iranian specialists "had accessed a US spy drone, landed it and after studying it in detail, they managed to create an analogue based on it". According to the expert, this was a huge blow to the reputation of the US Air Force, which had declared their combat capacities invincible.

"Moreover, last year, the IRGC command also published a video from which it was clear that they had been tracking American drones that accompanied the Daesh fighters in Syria and Iraq and provided them with logistical support. Therefore, this publication mainly tells us about the technical progress, skills and professionalism of the young Iranian Army", Hassan Shemshadi said.

As for the involvement of “Iranian” hackers allegedly working in the IRGC, Shemshadi pointed out that “we should keep in mind that in order to hide the failures they are suffering in the region, or to hide the power and professionalism of the IRGC officers, the United States resorts to various tricks and techniques, including in the media. Today, the most powerful hackers are in the US. And when they lose or are defeated by talented young Iranian specialists, they try to attribute all kinds of fables to Iran, or they deliberately declare that a hacker attack was made by Iranian hackers or experts hired by the IRGC".

Iran's IRGC Vow 'Crushing Response' to Threats Beyond State Borders
"They (Americans) didn’t expect that there would be those who could prevent their espionage activities and gain access to their information, including drone management", he told Sputnik.

“Iran, represented by the IRGC, has once again proved that the United States is not the world’s greatest power with military strength and the best technology. The IRGC has shown that the US super-equipment, their military tactics and intelligence activities are vulnerable and imperfect", Hassan Shemshadi concluded.

Views and opinions expressed in this article are those of Hassan Shemshadi and do not necessarily reflect those of Sputnik.