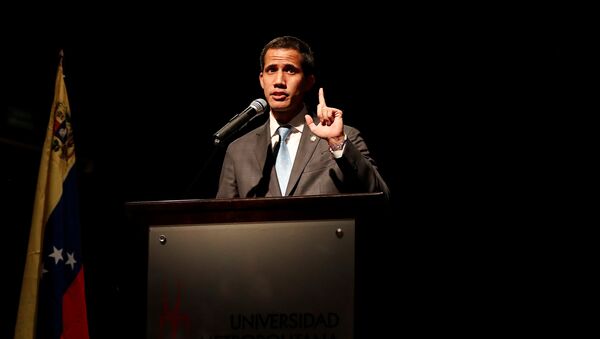 © REUTERS / Carlos Garcia Rawlins
Subscribe
International
India
Africa
Self-proclaimed Venezuelan Interim President Juan Guaido could face a significant term in prison after his return to Venezuela from Colombia, where he traveled in defiance of the travel ban imposed earlier by the Venezuelan Supreme Court, Deputy Judge of the Venezuelan Supreme Tribunal of Justice Juan Carlos Valdez told Sputnik on Tuesday.

"He is a person hiding from justice. What is happening with runaways, who are reentering the country and found by the authorities? They must be caught and sent to a prison … He may face up to 30 years in jail", the deputy judge said.

He added that the prosecution was currently analyzing the possible crimes committed by Guaido.

At the same time, Guaido, who is currently in Colombia, told Colombian broadcaster NTN24 that he was going to return to Venezuela, despite the risk of being arrested.

In January, Venezuelan Prosecutor General Tarek Saab announced his intention to conduct an investigation into Guaido and asked the Supreme Court to implement a travel ban. US National Security Adviser John Bolton has said that Washington condemns Venezuelan prosecutors for threatening Guaido.

On 22 February, Guaido arrived in the Colombian border city of Cucuta, where the so-called humanitarian aid from the United States and a number of other countries was being collected, in order to help deliver the supplies to Venezuela, despite the fact that the legitimate government has refused to accept the aid. While the attempt to forcefully bring the aid into Venezuela failed, Guaido stayed in Colombia to take part in Monday's meeting of the Lima Group in Bogota.

Venezuelan Vice President Delcy Rodriguez had dismissed allegations of a humanitarian crisis in the country, noting that international law provides for deliveries of foreign humanitarian aid only in cases of natural disasters and armed conflicts.

Brazilian VP Claims Only Guaido Can Pay off Venezuela's Debt to China
Caracas has warned that the illegal entrance of any vehicle into Venezuelan territory will be considered an offense by the country's military officers.

Venezuela is currently going through a political crisis. On 5 January, Guaido was elected as the president of the opposition-controlled National Assembly, which all other government branches have refused to recognize since 2016. On 23 January, two days after the Venezuelan Supreme Court annulled his election, Guaido declared himself the country's interim president. Incumbent President Maduro, who was sworn in for his second presidential term on 10 January after winning the May election, which part of the opposition boycotted, called Guaido's move an attempt to stage a coup orchestrated by Washington.

The United States immediately recognized Guaido as Venezuela's leader, after which some 50 other countries followed suit. Russia, China, Cuba, Bolivia and a number of other states have, in the meantime, voiced their support for the legitimate government of the constitutionally elected Maduro. Mexico and Uruguay have refused to recognize Guaido, but have declared themselves neutral and promoted a crisis settlement via dialogue.