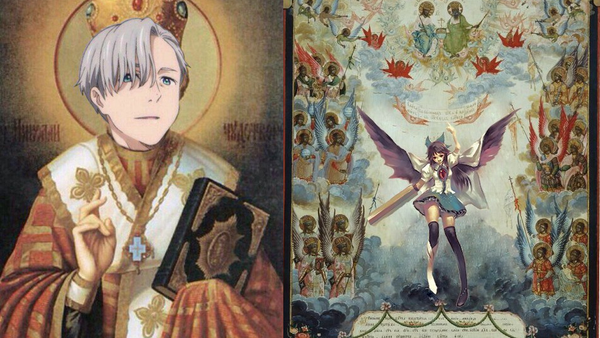 Images of saints drawn Japanese anime-style are examples of low-grade humour, but shouldn't be considered an insult by Orthodox believers, Dmitri Grozov, a Russian freelance illustrator known for his stylised illustrations of characters from famous movies and TV shows, has said.

"The content of anime icons currently being vigorously discussed varies greatly," Grozov said, speaking to Sputnik about the scandal in Bashkortostan. "There are works which have been drawn with great skill and high quality, and these can undoubtedly be called art. After all, the anime in this case is simply the style chosen by the author."

Russian Orthodox Patriarch Kirill Wishes Inner Peace to Believers
As for the "Banal Photoshop collages," and images of icons "crookedly" interlaced with anime photos, they were something else entirely, the illustrator said. In any case, "this is just rather low-grade humour with no artistic value, made by children without any malicious intent," the illustrator stressed.

According to Grozov, there is no point in carrying out a "witch hunt" over a silly joke.

"Personally, I think that since the time of the Renaissance, the Bible has not been covered so broadly in popular culture and art. And it would even be interesting to highlight some of its stories using new modern formats, even if this includes the format and style of Japanese animation. I only advocate that this be done in a talented and high quality way," Grozov concluded.

The Orthodox icons scandal kicked off earlier this month, after local TV in Ufa, Bashkortostan aired a story on the subject, with a local priest calling the authors "ignorant" and accused them of violating Orthodox canon law while calling their work "sinful." Churchgoers called the images 'blasphemous' and said they were "profoundly offensive." Some users even flocked to VKontakte to warn that the anime may carry administrative or even prison time for insulting believers' sensibilities.

Pussy Riot Members Denied Asylum in Sweden
In 2013, the Russian government approved a law on blasphemy following a series of crude and lewd activities in a church by self-proclaimed 'feminist punk rock group' Pussy Riot. In 2017, a blogger from Yekaterinburg, Russia was handed a 3.5 year suspended jail sentence over a video in which he was seen playing Pokémon Go during a service in a church and using obscene language stylised as church hymns.
Newsfeed
0
Access to the chat has been blocked for violating the rules . You will be able to participate again through:∞. If you do not agree with the blocking, please use the feedback form
The discussion is closed. You can participate in the discussion within 24 hours after the publication of the article.
To participate in the discussion
log in or register
loader
Chats
Заголовок открываемого материала