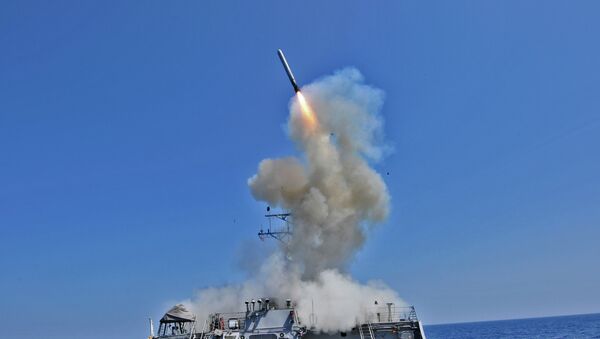 GENEVA (Sputnik) - Europe would be most vulnerable to any negative consequences of the potential collapse of the Intermediate-Range Nuclear Forces Treaty (INF Treaty), UN Secretary-General Antonio Guterres said on Monday at the Conference on Disarmament in Geneva, stressing the inadmissibility of a new arms race.

"The demise of the Intermediate-Range Nuclear Forces (INF) Treaty, should it be allowed to happen, would make the world a more insecure and unstable place. That insecurity and instability will be keenly felt here in Europe. We simply cannot afford to return to the unrestrained nuclear competition of the darkest days of the Cold War," Guterres said.

The UN chief also called on Russia and the United States to use the time remaining before the agreement's official termination to engage in a sincere dialogue on issues relating to the deal.

"It is very important that this treaty is preserved," Guterres stressed.

The United States formally suspended its obligations under the 1987 INF Treaty on February 2 and triggered the six-month withdrawal process, citing alleged Moscow's violation of the deal. The agreement bans all ground-launched missiles, conventional or nuclear, with ranges of 310 to 3,400 miles.

Reacting to this decision, Russian President Vladimir Putin stressed that all of Russia's earlier proposals remained on the table. However, he instructed the country's authorities to not initiate any new talks with Washington on the matter.

The UN Secretary-General has also addressed the issue of the New Strategic Arms Reduction Treaty, commonly referred to as the New START treaty. It entered into force in 2011 and covers a 10-year period with the possibility of a five-year extension. It is based on several previous joint non-proliferation arrangements and limits the number of deployed intercontinental ballistic missiles, submarine-launched ballistic missiles, nuclear-armed bombers, and nuclear warheads.  The talks on extending the agreement have been delayed over mutual concerns over compliance with the deal.

"I also call on the United States and the Russian Federation to extend the so-called 'New START' Treaty before it expires in 2021. This Treaty is the only international legal instrument limiting the size of the world’s two largest nuclear arsenals," Guterres stated.

The UN secretary-general added that the treaty's provisions on reciprocal inspections constituted an important confidence-building measure that benefited the entire world.

"I urge Russia and the United States to use the time provided by an extension to the treaty to consider further reductions in their strategic nuclear arsenals. I dream of the day when these bilateral arrangements become multilateral," Guterres stressed.

The UN secretary-general also stressed that the "slow demise" of the Cold War-era arms control architecture already had profound consequences and warned against a new nuclear arms race. He stated that the international community should develop new arms control measures that will take into account hypersonic weapons, nuclear challenges and the development of cyber technologies.

"Key components of the international arms control architecture are collapsing… New weapon technologies are intensifying risks in ways we do not yet understand and cannot even imagine. We need a new vision for arms control in the complex international security environment of today… Such steps could take into account regional nuclear challenges, as well as technological developments including cybersecurity, artificial intelligence and so-called hypersonic weapons’ that could be used to launch attacks at unprecedented speed," Guterres said.