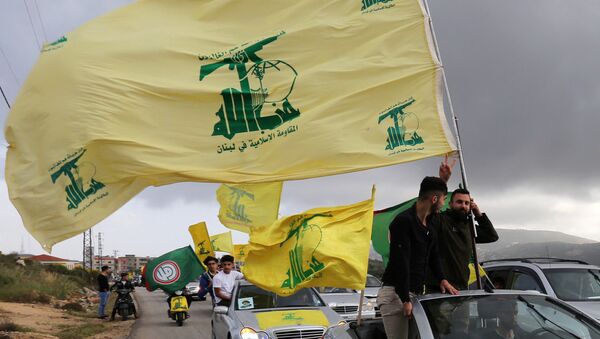 © AP Photo / Aziz Taher
Subscribe
The development comes after UK Home Secretary Sajid Javid was reported 24 February to be preparing to ban the political wing of Hezbollah - a move which will prevent supporters of the group from parading its flag on UK streets.

Britain said on Monday that it will ban Hezbollah in its entirety, including its political wing, deeming it a terrorist organisation, Reuters has reported.

"Hezbollah is continuing in its attempts to destabilise the fragile situation in the Middle East — and we are no longer able to distinguish between their already banned military wing and the political party. Because of this, I have taken the decision to proscribe the group in its entirety," Home Secretary Sajid Javid stated.

The move will have to be approved by Parliament, raising the prospect it could be opposed by Jeremy Corbyn, who once referred to members of its political wing group as 'friends'. Still, Israel has lauded the decision, and urged the EU to do the same.

"All who truly wish to combat terror must reject the fake distinction between 'military' & 'political' wings. Now is the time for the #EU to follow suit!" Israeli Security Minister Gilad Erdan said.

At present, the UK and EU alike only classify Hezbollah's military wing a terrorist entity. This allows Hezbollah's political members to operate in the country, appearing at the annual al-Quds day rally in London replete with the organization's flag, which promotes the destruction of the Jewish state.

The UK banned Hezbollah's military wing in 2008 after the Lebanese militia attacked UK soldiers in Iraq, the EU in 2013 due to the group's role in blowing up an Israeli tour bus in Bulgaria, resulting in deaths of five Israelis and their Bulgarian Muslim bus driver. An additional 32 Israelis were injured. A Bulgarian court is currently trialling in absentia the two Hezbollah operatives who participated in the attack, and Interpol has issued arrest warrants for them.

The German government has also repeatedly refused to 'fully' outlaw Hezbollah, with federal intelligence agencies believing almost 1,000 members of the group to be active in the country, raising funds and recruiting new members.

000000
Popular comments
Another UK Zionist move. The Tory government best donators are Zionist Jews. The Zionist media support that, and the UK people are so illiterate that accept it without questions.

landauroj
25 February 2019, 14:45 GMT7
000000
Hezbollah are helping to thwart regime change in Syria by the Western powers including the UK...that's why Javid is acting. He would better serve the interests of peace and justice in the world by ordering a public investigation of the role played by the UK Intelligence Services in the illegal attempt to alter the Middle Eastern political landscape.
Log Cabin
25 February 2019, 14:54 GMT4
000000
Newsfeed
0
New firstOld first
loader
LIVE
Заголовок открываемого материала
Access to the chat has been blocked for violating the rules . You will be able to participate again through:∞. If you do not agree with the blocking, please use the feedback form
The discussion is closed. You can participate in the discussion within 24 hours after the publication of the article.
To participate in the discussion
log in or register
loader
Chats
Заголовок открываемого материала
Worldwide
InternationalEnglishEnglishMundoEspañolSpanish
Europe
DeutschlandDeutschGermanFranceFrançaisFrenchΕλλάδαΕλληνικάGreekItaliaItalianoItalianČeská republikaČeštinaCzechPolskaPolskiPolishСрбиjаСрпскиSerbianLatvijaLatviešuLatvianLietuvaLietuviųLithuanianMoldovaMoldoveneascăMoldavianБеларусьБеларускiBelarusian
Transcaucasia
ԱրմենիաՀայերենArmenianАҧсныАҧсышәалаAbkhazХуссар ИрыстонИронауОssetianსაქართველოქართულიGeorgianAzərbaycanАzərbaycancaAzerbaijani
Middle East
Sputnik عربيArabicArabicTürkiyeTürkçeTurkishSputnik ایرانPersianPersianSputnik افغانستانDariDari
Central Asia
ҚазақстанҚазақ тіліKazakhКыргызстанКыргызчаKyrgyzOʻzbekistonЎзбекчаUzbekТоҷикистонТоҷикӣTajik
East & Southeast Asia
Việt NamTiếng ViệtVietnamese日本日本語Japanese俄罗斯卫星通讯社中文（简体）Chinese (simplified)俄罗斯卫星通讯社中文（繁体）Chinese (traditional)
South America
BrasilPortuguêsPortuguese
NewsfeedBreaking
14:51 GMT'Britney VS Spears': Pop Star's Fiancé Accuses Docu Makers of Earning Profit From Her Story
14:41 GMTRussian Union of Journalists Chief Slams 'Unacceptable' US Sanctions Against Colleagues
14:31 GMTUS Investment Firm Purchases Italy's Oldest Football Team
14:29 GMTUS to Find Ways to Get More Help to Haitian Migrants After US Envoy Resigned, State Dept. Says
14:25 GMTAnthony Joshua Says He Would ‘Fight King Kong' if He Had to as He Defends Titles Against Usyk
14:18 GMTFormer Nazi Helmut Oberlander Dies in Canada Before He Could Be Deported, Reports Say
14:07 GMTWhat's Behind Africa's Increasing Drive to Launch Satellites?
14:06 GMTExpo 2020 in Dubai Set to Boost Economic Development in Arab World, Organiser Says
13:58 GMTTwo Afghan Evacuees Charged With Sexual, Physical Assault in US, Justice Department Says
13:51 GMTBritish Government Preparing for 'Worst-Case Scenario' of Gas Prices, Says MP
13:43 GMTOutrage as Missouri High School Students Reportedly Come Up With Petition to Reinstate Slavery
13:42 GMTEC Does Not Expect Increase in Smartphone Prices Over Universal Charging Port Regulation
13:26 GMTAmericans Favour Trump Over Biden After Afghanistan Pullout Disaster, Poll Says
13:25 GMTComputer Game to Measure Children's Mental Development Launched by MSUPE
13:21 GMTDay 3 of 76th Session of UN General Assembly
13:18 GMTRoscosmos Starts Preparations for Landing First Russian Cosmonaut on Moon
13:18 GMTAs Modi Meets US Firms, Google Moves Court Against India's Competition Watchdog Over 'Leaked' Report
13:07 GMTBP Says It's Temporarily Closed Some UK Sites Due to Lack of Diesel, Unleaded Supply Problems
13:01 GMTView From the Top: Satellite Catches Images of Volcanic Eruption on La Palma
13:00 GMTUS Special Envoy for Haiti Resigns to Protest "Inhumane" Deportation of Haitians