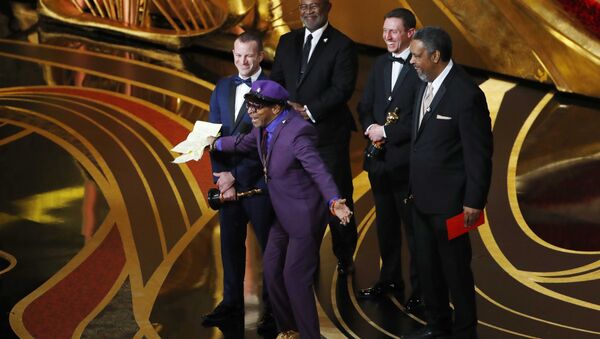 © REUTERS / Mike Blake
Subscribe
The US director, much famed for his box office hit “Do the Right Thing,” chose the wording to appeal to the 2020 electorate from the historic Dolby Theatre stage, calling on them to pick “the right thing” - “love over hate”. But, Donald Trump was little, if at all, impressed.

US President Donald Trump lashed out at film director Spike Lee on Twitter on Monday, calling his acceptance speech at the Academy Awards on Sunday evening “racist”. However, he chose to delete the derogatory tweet later, after myriads of mocking comments arrived on the issue.

“Be nice if Spike Lee could read his notes, or better yet not have to use notes at all, when doing his racist hit on your President, who has done more for African Americans (Criminal Justice Reform, Lowest Unemployment numbers in History, Tax Cuts, etc.) than almost any other Pres!” Trump wrote.

So gutless @realDonaldTrump deleted his tweet saying Spike Lee made a “racist hit on your President” (yes, really; that way round).

Spike Lee, who grabbed the best adapted screenplay prize for his “BlacKkKlansman”, went up to the stage, dressed all in violet, heartily welcomed the award presenter, his close friend and collaborator Samuel L. Jackson, and went ahead with his acceptance speech:

“The 2020 presidential election is around the corner”, he said, adding:

“Let’s all mobilize, let’s all be on the right side of history, let’s choose love over hate, let’s do the right thing”, he concluded, supposedly in a swipe at Trump, and also alluding to his 1989 hit film, “Do the Right Thing”.

Having first cast a couple of strong words at Oscar producers, warning them against interrupting his speech, which is typically done to especially prolific talkers, Lee pointed out that his award came during Black History Month, bringing up the 400th anniversary of Africans’ enslavement and transportation to America.

He separately mentioned that his grandmother was a graduate of the largely black Spelman College, despite her mother having been a slave.

The director continued to heap praise on his ancestors who, he said, “helped build this country”, as he was speaking “before the world tonight.” “We all connect with our ancestors… when we love our humanity”, Lee added.

The exchange, including Trump’s backlash, has caused a stormy debate online, with netizens feeling amused about Trump instantly feeling attacked, although there is no direct reference to him in Lee’s words.

Spike Lee didn't mention Trump. This is what he said: "Let’s all be on the right side of history. Make the moral choice between love versus hate. Let’s do the right thing!"

It's notable that Trump took an endorsement of "love" and doing "the right thing" as an attack on him! https://t.co/ZDkkk3XdpO

“The 2020 presidential election is around the corner. Let’s all mobilize, let’s all be on the right side of history, let’s choose love over hate, let’s do the right thing.”

It's funny how Trump interpreted that as an attack on him. https://t.co/HcOcVXlGEY

Also, once again, note that Trump insults the intelligence of a prominent black figure. https://t.co/XAf6ZsXM6E

Below is Spike Lee's speech. Nothing racist in it. What upset Trump was that Spike encouraged blacks to mobilize and vote. That's a threat to Trump's white supremacist power structure: pic.twitter.com/bXaREFcsRk

Spike Lee said to "choose love over hate." Fascinating that you feel attacked by that.

One user confessed to being “mindblown” over a “white supremacist”  calling Lee racist, while another believed Trump is “clearly even more agitated than usual”, suggesting that it might be due to the upcoming Kim Jong-un summit or pressing “criminal scandals”:

Donald Trump is now feuding with a black guy (Spike Lee) and a cancer patient (Harry Reid). Trump is clearly even more agitated than usual. Either he expects his Kim summit to go poorly, or he expects his criminal scandals to get even worse this week, or both.

There were those, however, who, on the contrary, accused “magaphobic” Lee of bigotry:

Lee had already taken a swipe at the president earlier, as he referred to Trump as “Agent Orange” when promoting “BlacKkKlansman” on CNN last summer.

000000
Popular comments
Look here boys and girls, trump is not only a cultured racist but a neoconservative ZioNazi.