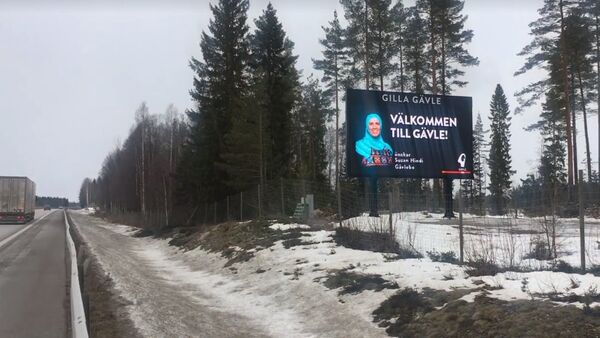 Gävle municipality has explained a veiled woman on its welcome sign as a token of the town's "great diversity". A subsequent journalistic investigation however, revealed her ties to a local mosque, whose leader reportedly glorified Daesh* and even tried to raise funds for the terrorists.

The Swedish town of Gävle has placed a Muslim woman in a veil on its digital advertising billboard in order to welcome visitors, the Swedish news outlet Nyheter Idag reported. The billboard is located at the northern entrance to Gävle.

Johan Adolfsson, communications manager in Gävle municipality explained that the woman on the sign is "one of Gävle's many Muslim women", stressing that her appearance on the welcome sign emphasised the town's "great diversity". According to Adolfsson, 120 languages are currently spoken in Gävle.

However, this diversity push has caused a backlash from politicians and ordinary Swedes alike, including people of immigrant decent, whom the veil was meant to represent.

At the beginning, some Swedish web users couldn't even believe their eyes and claimed that the hijabi welcome sign was photoshopped in order to create a stir. However, a video uploaded by a local man showed that it is indeed real.

Sweden Democrat MP Roger Hedlund, who is part of Gävle City Council, is highly critical of the ad for what it represents. He argued that a garment that for many women implies oppression and a lack of freedom shouldn't be legitimized in any way.

"One should think what this is signalling. Some indeed use this garment, the hijab, voluntarily. But not everyone. This a garment that for millions of women around the world represents a lack of freedom", Hedlund said, as quoted by Nyheter Idag.

His fellow Sweden Democrat Ghazal Saberian was also inflamed by the welcome sign she interpreted as a sign of obsession with political Islam.

"Has it ever occurred to you that at this very moment there are women imprisoned in Iran and whipped for simply taking off the veil? Have you ever thought that women are stoned to death in Saudi Arabia for taking off the veil?" Saberian wrote on Facebook, wondering why the authorities and the media keep bombarding the public with images and messages of oppression of women.

"A Gävle woman wrote to me. 'I am a Muslim but go without a veil. My sister in Iran is in jail for taking her veil off. Here, the municipality advertises with a hijabi. Why not use us regulars? Don't they understand that the poster recognises and accepts the hatred and persecution against us? Sincerely, Zohre'" Fors wrote on Facebook.

Adolfsson retorted that the woman chose to wear the hijab herself in accordance with her wishes and as part of her self-identification. He also stressed that she was chosen as an "ambassador of Gävle".

The news outlet Samhällsnytt reported that Gävle's "new poster girl", 32-year-old Suzan Hindi, had connections with the Gävle mosque (also known as al-Rashideen mosque) that was previously reported to be a stronghold of radical Islam. According to Samhällsnytt, Suzan's spiritial leader imam Abu Raad reportedly praised Daesh and even tried to raise money for the terrorists.

Following the revelation, many Swedes took to social media to vent their indignation, demanding the municipality backtrack and apologise.

​"I shudder when I see women with the Islam uniform. Sad that Sweden has become an Islamic country and that Norway is on its way to achieving the same goal", a Norwegian user wrote.

Another user urged Sweden's neighbours Norway and Finland to build a wall, calling it an "investment with fantastic results".

"Isn't it strange that it seems impossible to find a Muslim who is not an extremist?" yet another user tweeted.

"Time and again we see how the veil on children is getting normalised", another user wrote, citing a summer job ad with a girl in a hijab.

​Gävle is the largest town in Gävleborg County north of Stockholm and has around 75,000 inhabitants.

Sweden currently has no comprehensive ban on Islamic garments, such as the hijab, the burqa or the niqab. However, individual employers may prohibit employees from wearing religious, philosophical, and political symbols during working hours. By contrast, police and firefighters are allowed to wear the hijab.