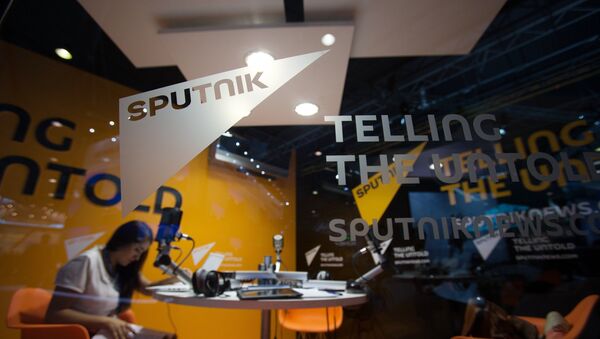 “Pakistan is one of the most important political actors in South Asia. We are glad to have the opportunity to receive exclusive content on the events in the region and the opportunity to deliver verified information to our Pakistani audience, including facts that are suppressed by others for these or those reasons," Kochetkov said.

The two media outlets agreed to develop their partnership based on their desire to forge long-term and mutually beneficial cooperation in English-language content exchange, strengthen cultural links between Russia and Pakistan, promote joint media initiatives, and organize joint events.

“We are delighted to be partnering with Sputnik to bring Russia to Pakistani readers, who are very much interested in unbiased news coverage in this deeply politicized world,” Nizami stated for her part.

Sputnik Becomes Partner of National Radio Network of Uruguay RNU
Sputnik is one of the largest international media companies offering country-specific and regional multimedia websites in 32 languages, analog and digital radio broadcasting in Russian, English and French in 95 cities and online. Sputnik newsfeeds deliver 24/7 content to leading international media around the world in English, Arabic, Spanish, Chinese and Farsi. Sputnik websites get more than 50 million visitors. Twenty-two bureaus around the world, from Tokyo to Montevideo, employ more than 1,000 people from dozens of countries. Sputnik is part of the Rossiya Segodnya media group with its headquarters in Moscow.

The Nation (nation.com.pk) is one of the most popular Pakistani newspapers in English. Founded in 1986 in the city of Lahore, it is part of the Nawaiwaqt Group, which also publishes newspapers and magazines in Urdu. The flagship Urdu newspaper of the group, Nawaiwaqt, was established in 1940. The Nation is printed in Islamabad, Lahore and Karachi, and committed to bringing to Pakistani readers the best of news sources from across the world, free of bias and free of false information.