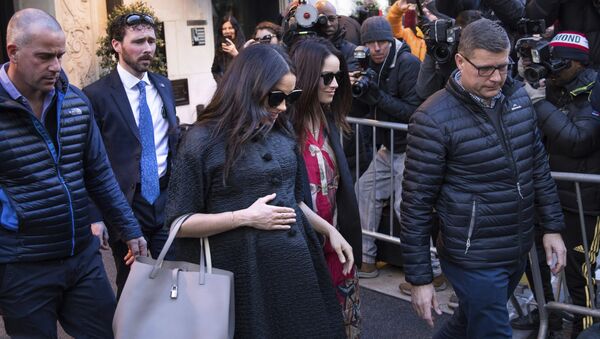 © AP Photo / Kevin Hagen
Subscribe
As the whole world is waiting for the first baby of the Duke and Duchess of Sussex to arrive, every single issue or topic about it automatically enters the spotlight, with the star-studded baby shower that rocked Manhattan’s upscale Mark Hotel the other day certainly being no exception.

TV host Piers Morgan has lashed out at Duchess of Sussex Meghan after she threw a lavish baby shower party at the luxurious Manhattan hotel Mark late last week, saying that the Queen would be “concerned” by the affair, the Express wrote.

The event was attended and organised by a number of the Duchess’ celebrity friends, with a tennis icon reportedly funding the grand bash, however, the total sum of about £384,000 that was supposedly spent on the soiree couldn’t escape the public’s attention. Morgan warned that the baby shower in New York would be “rubbing people’s noses” in the “royals’ wealth”, which is something the royal family hasn’t tolerated historically:

“The key thing about the royals is to be understated”, the Good Morning Britain host said.

He then added that the Queen’s “concerns” about it would be due to the fact that such baby showers are not typical of Britain and that she wouldn’t be able to make head or tail of the event.

“The concept of a very extravagant party with a load of famous people turning up to celebrate the arrival of a baby in a couple of months is not something we would do, so the Queen would be like, 'What is this?' to start with”, the journalist noted, going on to dwell on “the sheer scale of its opulence”. He also remarked that British people pay the Royal Family’s salaries, so many feel like they have a “vested interest” in how they live their lives.

Indeed, the strikingly costly bash, including a £480 harp performance by Erin Hill and designer Away suitcases as party favours worth £230 each, was instantly chewed over by royal fans. They also eagerly picked up on Meghan’s one-night stay at the most expensive penthouse suite in America after the party was over and her private jet return flight, which certainly left “a carbon footprint”.

“Meghan and Harry are being billed as Humanitarians. They are Patrons of charities for the disadvantaged”, one Twitterian remarked, with another one engaging in speculation about how many impoverished people “would that money have helped”, referring to the nearly £400,000 that the baby shower reportedly cost.

While there is only speculation about how the Queen might feel about the 37-year-old ex-actress’ star-studded baby bash, there have emerged reports suggesting that Prince William, for his part, is less than impressed by it.

“I think Prince William will be angered by all of Meghan’s lavish extravagance this week and the fact her baby shower looked so ‘celebrity’ rather than ‘royal’”, Princess Diana’s former butler Paul Burrell wrote for The Sun Friday.

“He has spent years working with the press to give them what they want but also gets what he wants in return — privacy. Meghan is doing exactly what he doesn’t — courting attention all for her and her baby”.

Burrell then remarked that Kate Middleton also had a baby shower for their firstborn, Prince George, adding, though, that by comparison with Meghan’s, that “was [a] very private and contained affair”.

“I think William, as well as Kate Middleton, will be totally bewildered by why Meghan is doing all this, as there’s no excuse for over-indulgence or excess and that’s what it seems to me”, claimed Burrell.

Countering the common discontent, British royal expert Katie Nicholl told Fox News that it was the Duchess’ friends that in actual fact covered the expenses.

“A lot has been made of how much the shower has cost, but this is not being paid for by the taxpayers, but by her friends, so I really don’t see why anyone should have a problem with it”, Nicholl shared, agreeing that “a baby shower is more of an American phenomenon than a British one”.

“I am told Meghan was very keen to have a shower and thrilled that her friends Serena Williams and Amal Clooney offered to host the party. They really pulled out all the stops and made it a fabulous celebration for Meghan”, Nicholl concluded.

000000
Popular comments
Absolutely no end to the shear stupidity of these f#*king royal morons. They have no place in this modern day and like dinosaurs, should be MADE extinct!!! Time they all jumped into a bus driven by the old senile twat Philip, and strait over a cliff!!!