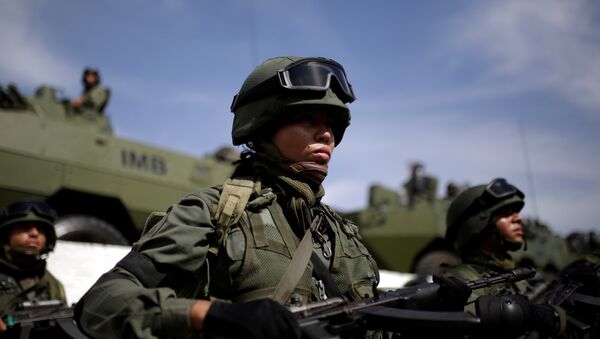 Dimitris Pantoulas, political analyst and consultant based in Caracas has discussed with Sputnik a statement made by Venezuelan opposition leader and Western-backed self-proclaimed president Guaido that "all options" are possible to secure the "freedom of Venezuela" amid a further escalation of US rhetoric toward President Maduro.

Sputnik: Self-proclaimed leader Guaido said it was time to propose "all options" to secure the freedom of Venezuela. What options are those? How likely is a military intervention?

Dimitris Pantoulas: When Guaido speaks about all possible options being on the table it resembles similar declarations that President Trump has made in the past. This is a subtle way to say that foreign military intervention is not an unlikely scenario.

The possibility of military intervention is rising by the day, especially when all the other possible solutions are failing. The unwillingness of the Venezuelan government and also from radical domestic and international oppositional actors to engage in a meaningful and goal-centred negotiation process creates negative conditions for a peaceful solution. Today fewer people want a constitutional solution that includes participatory mechanisms (i.e. elections and referendums) than a few months ago, which is a shame.

Sputnik: Bolton gave an ultimatum to Venezuela saying that either the military should embrace democracy or face sanctions and isolation. How legal is it for the Security Adviser of a different country to dictate what an independent country should do?

LIVE UPDATES: Venezuela Tensions Rise Over US Humanitarian Aid Move
Dimitris Pantoulas: The US government has taken a tough stance against the Venezuelan government and lately, we have seen many declarations from US politicians and advisors that are outside diplomatic language and norms. Nevertheless, the situation has become more complicated because the US government has recognised Mr Guaido as Venezuela's president, which is unprecedented in modern politics. Having said that, I think that all actors when they speak about a foreign country should pay the necessary respect and honour to this country and its people without using ultimatums, regardless of whether this is a small or large country.


Sputnik: President Maduro cut off diplomatic ties with Colombia? What will be the repercussions of this step?

Dimitris Pantoulas: Very few repercussions from this step as diplomatic ties with Colombia are already at a historical nadir. It is a pity that two countries with a common history and so many things in common are facing each other. I do consider that Colombia could play a positive role to resolve Venezuela's political crisis in a peaceful way, as Venezuela did a few years ago in the peace negotiations in Colombia between the government and the FARC, something that unfortunately is not the case today.

Sputnik: Why are Brazil and Colombia following US instructions in this situation given the long record of US intervention in Latin American politics?

Brazil Urges Int’l Community to Join 'Liberation Effort' of Venezuela - Reports
Dimitris Pantoulas: We are not sure how far the two Latin American countries will follow the US in the Venezuelan crisis, but I think the fact that the two countries have governments with different political ideologies than the one in Venezuela, and are similar ideologically to the US (especially Brazil) influence this decision. We also should not forget that the Venezuelan government has supported in the recent past political options in these countries that today are in the opposition. So I suppose the two governments will want to avoid any future Venezuelan intervention in favour of their political opponents.

READ MORE: US to Hold Accountable Opponents to 'Restoration of Democracy' in Venezuela

Sputnik: In your view, why is the US sending humanitarian aid instead of easing the sanctions placed on Venezuela?

Dimitris Pantoulas: The US sanctions were primarily placed against government officials and of late have escalated to include large chunks of the economy in order to press Nicolas Maduro to change course. The humanitarian aid is an implicit means that the US government uses to say that Guaido will have its future support, and also the US uses humanitarian aid in order to discredit Nicolas Maduro's economic and social policies. The extended sanctions are a way of debilitating Maduro, even though that will hurt ordinary citizens, while aid is one way to strength Guaido. Still, I am not so sure if creating economic problems is the best way to help a country, while I can understand individual sanctions against corrupted officials or human rights violators.