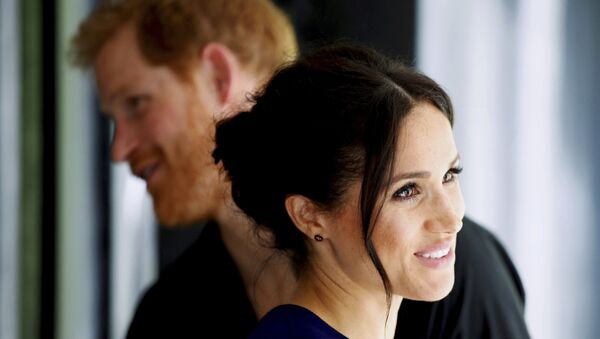 Duchess Meghan’s pregnancy is even more special, because she is making it so. From the time she confirmed to the world’s press that she was expecting, she has not let go of that bump and coyly looked at the cameras every chance she got.

Her ‘baby shower’ in New York was the most outlandish display of Hollywood excess that the Royal family has experienced.  Not a low-key affair with nice gifts from the White Company, bit of Harrods designer gear and a few booties from Boden, like Kate, but £60k a night blown on a private hotel suite, a private jet provided by her human rights industry friend, Amal Clooney and an over the top sugar-coated macaroon towered confectionery at a cost of hundreds of pounds. The Clooneys, Prince Charles and Meghan are environmental activists. While flying around in private jets and trains, they expect rest of us to curtail our couple of holidays a year on bucket airlines to cheap hotels for a couple of weeks rest from the daily grind.

This confected baby shower extravaganza lasted five days. Most baby showers take an afternoon or a wine fuelled evening, with a teetotal mother-to-be.

This will not amuse the Queen nor indeed endear her to the public.

Meghan Markle’s Friends Fear ‘Emotional Trauma’ Can Affect Her Baby – Reports
We know the Royal family is wealthy, have multiple homes, servants, chauffeurs and cars and live a very gilded caged existence. But unlike Hollywood fame and fortune, we do not like the opulence constantly showcased by Ms Markle.

Ms Markle and Harry are trying to reinvent themselves as caring, ordinary, charity minded folk. However, she has become political, too political. Again, something the Royals never do, except for Prince Charles, who has recently curtailed his own green activism after much criticism.

Ms Markle hasn’t been too wise in choosing her hobby horses.  She has visited Grenfell residents to express her solidarity but she didn’t expect the backlash from the public when she launched her cookbook from inside a mosque which has links to 19 terror suspects, including Jihadi John. Can anyone imagine her sitting down and writing recipes? We are not fools.

She visited ‘sex workers’ (aka prostitutes) in Bristol and imported the American brain wave of “talking nanas”, where supportive notes are written on … bananas and then handed out as food. Messages such as “you are strong” “you are special” and “you are brave” were scribbled on said bananas, while standing in a £1,400 dress and £500 boots. It was dress down day for Meghan. The prostitutes were offended to be offered bananas when they thought the Duchess had the means to help more.

Then, as the newly appointed Patron of the Association of Commonwealth Universities (what could possibly go wrong?), she visited a university, and got embroiled in a campaign to ‘decolonise the curriculum’. The little Trots at the university want to ‘confront the legacies of the empire’ (remember, grannie is in charge of the Commonwealth, our former empire), where our Meg exclaimed, ‘oh my God’ at the diversity figures produced by the Trots.

The Trots promote black and female professors and thinkers instead of ‘male, pale and stale’ ones. Our university professors already reflect the ethnic make-up of the UK. Someone needs to tell her that the current identity politics in the UK is toxic and divisive and should be avoided. Is it any wonder her PR staff are resigning?

Teen Drops Sudden F Bomb, Cracks Prince Harry & Meghan Markle Up (VIDEO)
Our Royals are still in situ because we chooseto be a monarchy.  I was a Republican but after witnessing the years of dedicated service of our Queen and people like Princess Anne, I became less hard line because I became to respect the Queen and her work.  I even attended two garden parties, I’m now a temporary monarchist, partly because the idea of any of our political class becoming president fills me with dread. Imagine President Blair?

I stated on BBC’s Question Time that I worried about her heir, Prince Charles, because of his political activism, and I don’t believe he has the backbone and stature to take this country into its next phase, Global Britain.

William might, he and Kate are slipping into their roles quite well.  Understated in dress, words and actions, the Sussexes would be well to step back in line behind these two and act a little more demurely.

I offer a piece of advice to the Sussexes, you are not the Beckhams, stop behaving like them. If you want to pop down to my constituency, which includes Sussex, we could have a cup of tea and a slice of cake from Waitrose and I will tell you how to act, and that’s to stop acting.

If not, the monarchy will end with your generation.