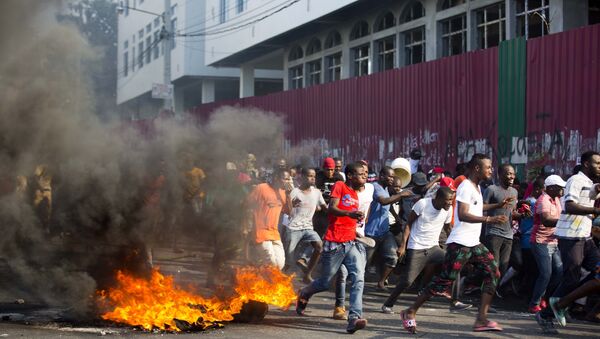 "Venezuela will not be able to free itself from the Chavista regime on its own", he said at the Lima Group meeting in Bogota, Colombia.

The retired army general claimed Venezuela threatened the entire region, and its neighbors should deal with this threat. He added outside players could capitalize on the conflict. However, Mourao also said Monday in an interview with the Globo News broadcaster, cited by Reuters, that Brazil would not allow the US to use its territory for military invasion in Venezuela.

READ MORE: Brazil Won't Allow US to Use Its Territory to Invade Venezuela — Reports

Venezuela's President Nicolas Maduro, whose leadership was challenged by lawmaker Juan Guaido last month after the latter proclaimed himself interim president, has condemned interference in the domestic standoff by neighboring states and the United States and has repeatedly expressed readiness for dialogue.

US Attempt to Deliver Aid to Venezuela 'Timed to Try to Pressure Maduro' - Prof.
Brazil, Colombia and the United States, among others, have sided with Venezuelan opposition leader Juan Guaido.

Russia, China, Cuba, Mexico and other countries continue to back constitutionally elected President Nicolas Maduro, who has dubbed Guaido a US puppet. Maduro has slammed US attempts to bring aid to the country as a prelude for invasion.

On Saturday, attempts to force unauthorized aid into Venezuela led to clashes at the border which prompted Caracas to cut off diplomatic ties with neighboring Colombia. Venezuelan Vice President Delcy Rodriguez dismissed allegations that there is a humanitarian crisis and noted that, according to international law, foreign aid should only be delivered in cases of natural disasters and armed conflicts, unless the government requests it.

'Embrace Democracy': Bolton Threatens Sanctions Unless Venezuela Allows in Aid
Meanwhile, the US Vice President Mike Pence has announced that Washington is providing an additional $56 million in funding for US allies in the region to help Venezuelan refugees.

However, the United Nations and the Red Cross have urged Washington not to politicize humanitarian assistance and not to deliver aid without the consent of the Venezuelan government.