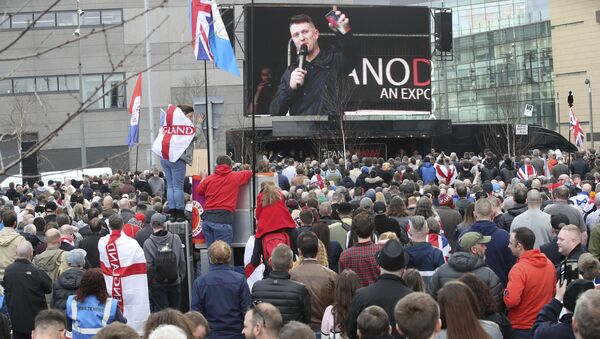 © AP Photo / Danny Lawson/PA via AP
Subscribe
International
India
Africa
Tommy Robinson, the co-founder of the English Defence League (EDL), has consistently blasted various media outlets for providing what he calls biased and unfair coverage of his activities and taking his words out of context.

British right-wing activist Tommy Robinson has organised a demonstration at the BBC’s Salford headquarters to protest against investigations by the media outlet’s Panorama programme into him.

READ MORE: Robinson Blasts UK Judge Over Giving Bail to Gang Rapists, Denying One for Him

During the protests, Robinson, whose real name is Stephen Yaxley-Lennon, showed his documentary, Panodrama, which was made in response to the BBC’s actions:

“Evidence of a corrupt media is that not one single journalist in Britain has reported on Panodrama”, he told a crowd chanting “Oh Tommy, Tommy”.

Activist on Tommy Robinson Case: 'The Establishment Don't Like Him'
There was a slight technical hitch with the screening, and Tommy played footage from his wedding day to thousands of demonstrators gathered in Salford’s Media City. The clip was accompanied by the Take That song “Greatest Day”, in what he said was a tribute to his wife.

The one-hour documentary, which he eventually played, showed former aide to Robinson Lucy Brown secretly filming a meeting she had with BBC investigative journalist John Sweeney.

It also featured Robinson confronting Sweeney during a planned interview for the programme. The film ended with him showing his advocates how to cancel their TV licences if they are “fed up with paying for their propaganda”.

“We are constantly battling a media that lie”, he told the gathering.

In Manchester for Tommy Robinson’s film ‘Panodrama’. Undercover footage shows how the BBC tried to set him up for their ‘Tommy Takedown’ programme. Instead they walked into a trap of their own making. Biased Broadcasting Corp shown up for what it now is. Scrap the license fee! pic.twitter.com/Goia0KhkYE

After the video was screened, a clip, which was reported earlier this month, showing a drunken Robinson proclaiming himself “king of the whole Islam race” was played on the big screen, with Tommy exclaiming in front of the crowd: “F*ck you fake news”.

Tommy Robinson has today completely exposed how corrupt the BBC is. What a fascinating documentary and a real eye opener. Getting rat arsed at our expense, fake sexual allegations, racism, homophobia. No not Tommy, the head of panorama Mr John Sweeney. #Panodrama

Regardless of your thoughts on Tommy Robinson, everyone should be disgusted at the way @BBCPanorama are paying people to make stuff up to destroy them. And why have no MS reporters not commented or interviewed BBC. @IainDale @piersmorgan @JuliaHB1 @bbcnickrobinson @NickFerrariLBC

Reacting to Robinson’s exposé, a BBC spokesperson dismissed the claims that “our journalism is ‘faked’ or biased”.

“BBC Panorama is investigating Tommy Robinson, whose real name is Stephen Yaxley-Lennon. The BBC strongly rejects any suggestion that our journalism is ‘faked’ or biased.  Any programme we broadcast will adhere to the BBC’s strict editorial guidelines. Some of the footage which has been released was recorded without our knowledge during this investigation and John Sweeney made some offensive and inappropriate remarks, for which he apologises. BBC Panorama’s investigation will continue”.

In the meantime, the National Union of Journalists (NJU) issued a statement to “roundly condemn” Robinson and “his fellow, far-right thugs who intend to intimate staff at the corporation, particularly those working on Panorama”.

“BBC staff should be free to do their jobs without these threats. Intimidation, threats and violence carried out by far-right protesters systematically targeting the media, especially photojournalists, are becoming more frequent and we will always call out this behaviour and report criminal activity to the police”, a NUJ spokesperson said.

Slightly over a week ago, Robinson lashed out at The Sun after the UK tabloid reported on a leaked video, showing Tommy declaring himself “king of the whole Islam race”, claiming to be a Zionist and yelling “f*ck Palestine”.

In a Facebook video, Tommy explained that the footage was from a group chat with friends of different ethnicities, who were “bantering each other non-stop”. He admitted that he was “embarrassingly drunk”, but accused The Sun of editing clips and taking his words out of context.

WATCH Tommy Robinson Proclaim Himself 'King of the Whole Islam Race'
Robinson has regularly been making headlines since last May when he was detained on a contempt of court charge for livestreaming outside a courthouse, where a gang rape trial was being held.

The former leader of the right-wing street protest movement English Defence League was already on a suspended sentence for contempt of court for filming a video in Canterbury Crown Court in May 2017 during the trial of four suspected rapists. Such a turn of events caused the judge to activate a three-month sentence for the previous offence and add 10 months for the new one.

READ MORE: 'We Want to Wake People Up to Reality of BBC Propaganda' – Protester

Robinson, in turn, lambasted PayPal’s decision as “fascism”, saying that it was an attempt to silence him and prevent him from reporting stories that “media don’t want to cover”.