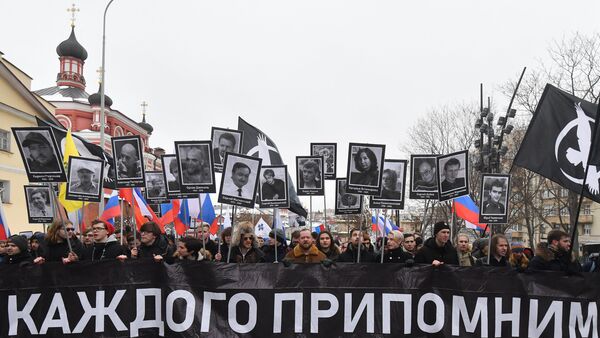 Earlier in February, the Moscow Department of Regional Security and Anti-Corruption told Sputnik that the city's authorities approved an application for holding a march in memory of Nemtsov on February 24 involving up to 30,000 people.

"About 6,000 people are taking part in the march. The police and the Russian National Guard are ensuring public order," the police said.

The march passed along Strastnoy, Petrovsky, Rozhdestvensky, Sretensky boulevards to Academician Sakharov Avenue. The column was led by leaders of political parties and organizations.

Hundreds beginning to gather in Moscow for the 4th annual march in memory of slain Kremlin critic Boris Nemtsov pic.twitter.com/hwZX6P76uZ

​The march in memory of Nemtsov was conducted without violations and no one was detained, a spokeswoman for the Moscow Department of Regional Security and Anti-Corruption, Elena Romanova, told Sputnik.

​Nemtsov held a number of senior positions in the Russian government in the 1990s and became a prominent opposition figure in the 2000s. He was shot dead in downtown Moscow on February 27, 2015, while walking with a friend. Five participants of Nemtsov's murder were sentenced to prison terms ranging from 11 to 20 years.

Moscow march in memory of Boris Nemtsov four years after his murder pic.twitter.com/AlDu4gbn3K