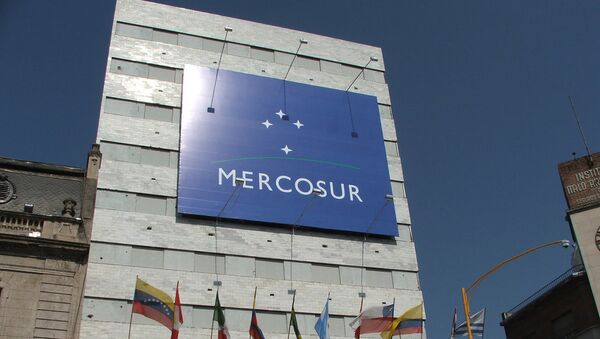 A top EU official is criticising South American bloc Mercosur for backtracking in the ongoing trade talks after making substantial progress last year; he is citing political changes in Brazil as a likely reason behind the alleged obstruction.

Kristian Rouz — EU Agriculture Commissioner Phil Hogan says the Latin American regional integration bloc, known as Mercosur, is backtracking in the ongoing negotiations to strike a free trade deal with the EU. Hogan said a separate deal to deepen the trade in beef with the US appears to be more likely, despite Washington's tough stance on trade, than a deal with Latin America.

Speaking at the Paris farm show Saturday, Hogan said Mercosur countries have changed their position on several previously agreed issues during the ongoing trade talks with the EU. Hogan suggested a Mercosur trade deal could now be delayed.

"We're not closer (to an agreement) because there has been some backtracking on the part of the Mercosur countries in relation to certain products where we had agreements in 2017", Hogan said.

Meanwhile, Hogan also said the EU could agree to increase its import quota for beef originating from the US. The move is expected to advance the ongoing trade discussions between Brussels and Washington, as the sides seek to reach a sweeping accord on trade. US President Donald Trump has threatened to impose crippling tariffs on European car imports, and Brussels seeks to prevent such a move.

READ MORE: Trade Deal Between Mercosur, EU Will Not Be Signed at G20 Summit — Minister

However, Hogan said a deal with Mercosur has been a highly-anticipated development over the past few months. He stressed the agreement could significantly boost the exports of European agricultural goods, as well as increase the volume of South American commodities flowing into Europe.

The Trade Commissioner also noted that the deal's fate is up in the air.

"I regret this very much but there are political reasons in the Mercosur countries for this it seems", Hogan said.

For her part, German Chancellor Angela Merkel suggested back in December that the recent election of President Jair Bolsonaro in Brazil, who is seen as a right-wing populist figure, could make trade talks harder.

Bolsonaro has vowed to protect Brazil's foreign trade against imports of cheaper foreign goods, although the EU has expressed a willingness to buy more Latin American products as part of the proposed accord.

Mercosur also includes Argentina, Paraguay, and Uruguay. The former was severely battered by a currency crisis last year and is now facing an economic recession and a presidential election this year, which could see centre-left former President Cristina Fernandez de Kirchner return to office.

For his part, French President Emmanuel Macron has also criticised Bolsonaro for his efforts to prevent a trade deal between Mercosur and the EU. Macron said Bolsonaro's push to withdraw from the Paris climate accord could make an EU trade deal impossible.

"There has been a major political shift in Brazil recently, so Mercosur has to consider the impact of this change", Macron said. "From the French side, I do not agree with signing broad trade agreements with countries that do not respect the Paris agreement".

Trade talks between the EU and Mercosur have lasted for roughly 20 years, and last year finally saw some substantial progress in the negotiations, according to European officials. The South American bloc has sought to ramp up its agricultural and commodities exports into the EU, while Brussels is interested in exporting more cars and dairy products to Latin America.

Hogan said the next round of trade negotiations with Mercosur will commence in March.