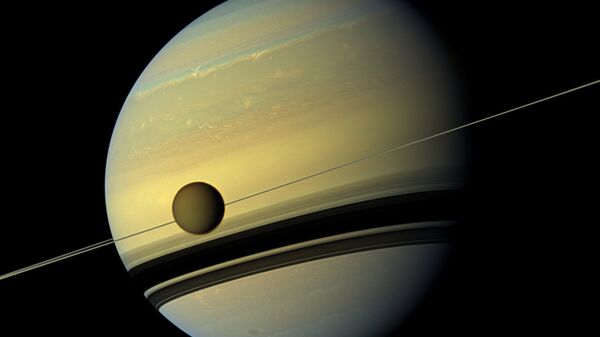 A NASA planetary scientist revealed that our Solar System’s ocean worlds could have the best possibility of hosting alien life.

Dr Amanda Hendrix, co-lead of the NASA Roadmaps to Oceans World Group, explained to the Daily Express how the Ocean Worlds program represents one of the best chances of encountering alien life in our home solar system.

Hendrix believes that alien life could be found on Saturn’s moon, Titan, as it has “both an ocean at the subsurface and it also has liquid hydrocarbon lakes on the surface.”

“There would not be aliens with green heads swimming around in there. I think it is possible there could be some simple life forms in some of these ocean worlds in our outer solar system,” she said.

The NASA Ocean Worlds Exploration Program represents a significant strategic shift in its attempts to find alien life, since it was discovered that Mars, which was considered scientists’ best opportunity to look for life, is “not currently habitable.”

“Mars now appears to be our best chance of looking for past evidence of life,” she added.

Science & Tech
NASA Reveals Method to Discover Alien Life in 'The Next Several Decades'
Hendrix also noted that apart from Titan there are at least two more worlds which could host “some crazy form of methane-based life,” referencing Enceladus, the sixth-largest moon of Saturn and Europa, the smallest of the four Galilean moons orbiting Jupiter.

The NASA scientist believes there is an additional benefit to exploring these distant worlds for alien life.

According to Hendrix, NASA is currently selecting between two concepts for future study of the icy worlds: the Dragonfly mission which proposes dropping a lander on Titan to investigate the complex chemistry of the moon, and the Comet Astrobiology Exploration SAmple Return (CAESAR) – which proposes taking samples of ice from known comets. According to Hendrix, NASA will make a choice as to which of these two missions they will proceed with.

There are also proposed missions to visit Enceladus which would take the form of a flyby mission, Hendrix told the Express. During such a mission a spacecraft will fly through the plumes, perhaps multiple times, and scoop-up plume material that has been ejected from the subsurface ocean.

Hendrix’s team is currently focusing on the Europa Clipper Mission — a planned attempt to study Europa, although the launch date of this mission has not yet been disclosed.

“The Europa Clipper Mission will carry ice-penetrating radar and that will help us understand how thick the ice is across the surface. We will also do a lot of imagery on the surface, because we need to understand the dynamic between the ocean and its surface.” she noted, adding that according to Hubble Space Telescope data, Europa exhibits some active plume activity right now, which “might be good evidence for ocean material coming up through and escaping from these cracks and making geyser-like plumes.”