Journo on White Helmets Resettlement to UK: They're Not Even British Citizens 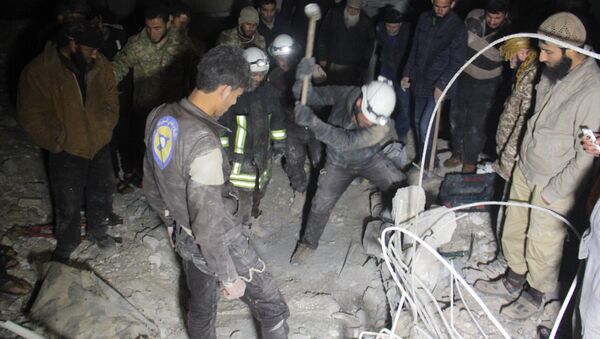 © AFP 2022 / Omar haj kadour
Subscribe
Britain’s Home Office confirmed that some 100 volunteers and family members from the Syrian White Helmets group have been resettled in the UK, after volunteers were evacuated last year with the help of British government officials. Sputnik has spoken about this with journalist and political commentator Vanessa Beeley.

Sputnik: Britain's Home Office has confirmed that some 100 volunteers and family members from the Syria White Helmets civil defence group have been resettled in the UK. How significant is this?

Vanessa Beeley: I mean, I think what is extraordinary is that this release of information has been published by the BBC three days after one of the BBC producers put into question the narratives that are produced by the White Helmets inside Syria by stating publicly on his Twitter page that the White Helmets and other affiliated activists had staged the hospital scenes in Douma, presenting it as an alleged chemical attack carried out by the Syrian government. Of course, those scenes were what were used in the mainstream media, particularly in the UK, to rush to judgment on it being a Syrian government chemical attack, which then of course led to the unlawful bombing by the UK government, French, and American governments one week later. So you know, for me, this is not surprising that the BBC now is going into serious damage limitation.

Sputnik: Can you explain some of the alleged terrorist links associated with the White Helmets?

White Helmets Preparing to Film Staged Chem Attacks in Idlib Hospitals - Moscow
Vanessa Beeley: In December, there was also a roundtable discussion at the UN Security Council in New York, where Maxim Grigoriev of the Foundation for the Study of Democracy presented compelling evidence of the White Helmets being involved in cross border organ trafficking operations, working with the terrorists, in particular al-Qaeda*, which is the dominant terrorist group operating inside Syria. That evidence came from the testimony of Syrian civilians.

I have also gathered testimony from Syrian civilians of the White Helmets abducting children for the staging of chemical weapon events, of organ trafficking or taking children for organ trafficking and that is from eastern Aleppo and from East Ghouta. We've also seen video evidence actually shown by the White Helmets themselves of them participating in terrorist atrocities against Syrian civilians; the dismemberment of the bodies of Syrian Arab Army prisoners of war, for example in Daraa. The evidence against this organisation is mounting exponentially.

Sputnik: If we look at the case of Shamima Begum, a subject that's reached much controversy in recent weeks, reaction has largely been against her returning because of her terrorist links. Why have we not seen the same condemnation against White Helmet volunteers resettling back in the UK?

Daesh Teen Bride ‘Heart Broken’ as UK Moves to Strip Her of Citizenship
Vanessa Beeley: This is the extraordinary thing I mean, here we have basically 100 Shamima Begums, who have been allowed into the UK and they're not even British — they're not British citizens. So this is complete hypocrisy on behalf of the British government but as I said, what it demonstrates, is that they are going to any lengths to protect what is effectively a British intelligence asset or propaganda construct that was created by a former MI6 officer James Le Mesurier in 2013 in Turkey and Jordan, not in Syria. So you know, yes — this has to raise the question again, why have 100 potential terrorist affiliates been allowed into the UK with no assurances? What evidence is there that the British government has carried out the cross checks necessary to ensure that they are not allowing terrorists onto British soil?