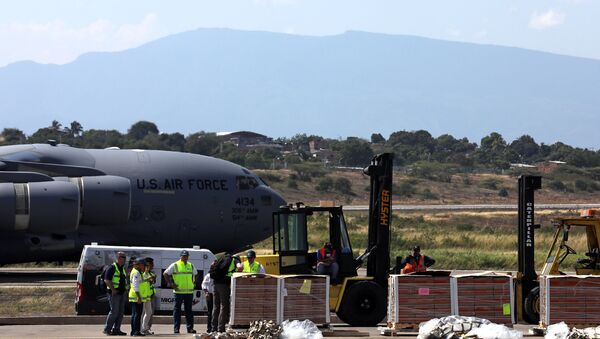 © REUTERS / Luisa Gonzalez
Subscribe
International
India
Africa
WASHINGTON (Sputnik) - A US Air Force plane carrying humanitarian aid, expected to be distributed by the Venezuelan opposition, has arrived in Cucuta, Colombia on Friday afternoon, a Sputnik correspondent reported from the airport.

Bolivian President Likens Venezuela Relief Aid to Trojan Horse
Venezuelan President Nicolas Maduro described the plan as a prelude for invasion and promised to stop the aid from entering. The president warned that the US and its allies were using "the pretext of delivering humanitarian aid" to try to "destroy the independence and sovereignty of the country."

Earlier on Friday, Brazil military said that the country will stop airlifting aid to the town of Pacaraima on Venezuela’s border until further notice. A a Brazilian Air Force (FAB) plane carrying relief aid landed Friday in Boa Vista in northern Roraima, state near the Venezuelan border. Three trucks with 51 tonnes of rice arrived in Boa Vista on Thursday. The aid is stored in a hangar at the Boa Vista air base.

The situation in crisis-torn Venezuela escalated on January 23 when Guaido declared himself interim president, disputing last year's reelection of Maduro. Guaido was almost immediately recognized by the United States and its allies. Russia, China, Mexico, among other nations, supported Maduro as legitimate president.