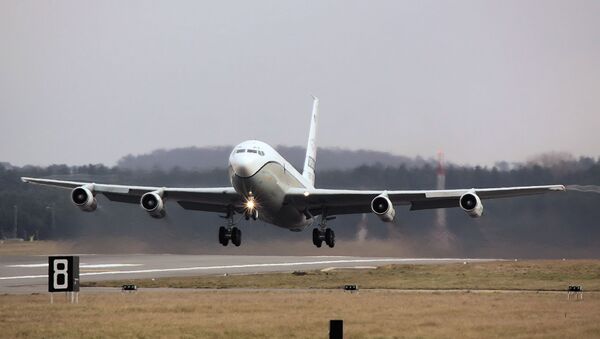 Unarmed US military aircraft carried out a surveillance flight over Russia this week under the protection of the Treaty on Open Skies, the Pentagon has announced.

Signatories to the treaty permit legal reconnaissance missions over one another's territory, military facilities and other sensitive locations. There are 34 signatories, including many NATO and former Warsaw Pact member countries.

"Russia is aware of the flight," US Defense Department spokesman Jamie Davis told reporters Friday, adding that "six Russian Federation observers are on board the US aircraft to monitor all phases of the flight."

The flight went airborne Thursday and will end on Friday. The US-Russian crew is flying in a Boeing OC-135B jet, which was designed specifically for doing Open Skies flights.

Two US OC-135B aircraft are stationed is in Nebraska, where there is only corn, Warren Buffett, more corn and the US Air Force's 55th Wing at Offutt Air Force Base. These ancient aircraft are retrofitted versions of the C-135B Stratolifter cargo transporters that rolled off Boeing production lines in 1961. The jets were transformed into WC-135B weather recon planes before reaching their current Open Skies configuration.

While it's anyone's guess what the US military aircraft might be interested in conducting surveillance on, Russian President Vladimir Putin gave a speech celebrating the upcoming Defender of the Fatherland Day on Friday in which he noted that "we are focused on re-equipping troops with the most advanced weapons and the most modern means of control and communications. Our weapon prototypes are unparalleled, at least for now, and I think it will be that way for a long time."

During the Presidential Address to the Federal Assembly earlier this week, Putin warned the US against deploying medium- and short-range nuclear missiles in Europe, stating that such a step would "dramatically exacerbate the international security situation."

On Friday, Putin said "Russia is a peace-loving state; we are pursuing a responsible foreign policy, striving to strengthen the global stability. We will continue to strengthen the country's defense potential, develop and modernize its armed forces."