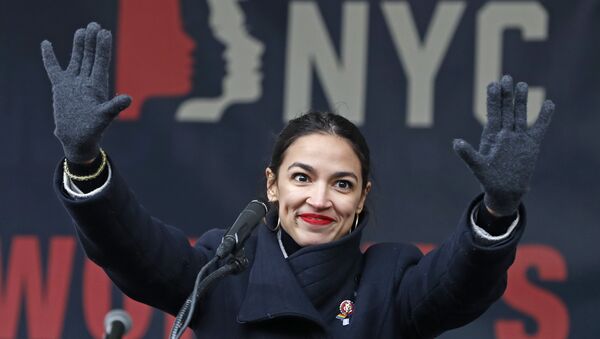 © AP Photo / Kathy Willens
Subscribe
International
India
Africa
Actress and comedian Roseanne Barr landed in hot water last May after tweeting that former President Barack Obama’s senior adviser Valerie Jarret was the baby of the Muslim Brotherhood and the movie “Planet of the Apes”. Even though she apologised for the tweet, ABC cancelled her sitcom “Roseanne”.

Actress Roseanne Barr has taken a swing at freshman Congresswoman Alexandria Ocasio-Cortez, calling her a “bug-eyed b*tch” over the Green New Deal in a YouTube video.

READ MORE: 'I Thought the B**** Was White': Roseanne Erupts Over Tweet on Obama Adviser

Although she never mentioned the New York congresswoman by name in the nearly two-minute video, the actress alludes to Ocasio-Cortez as the person who introduced the Green New Deal, designed to deal with income inequality and climate change.

“That Green New Deal that that Farrakhan-loving b*tch, I don’t even remember her name, the bug-eyed b*tch that looks like a realtor. She got them realtor eyes… Bug-eyed lying b*tch, Farrakhan fan, Israel hater. Lefty. Dumba**, dumba**, dumb as they get”, she says in the video while chewing gum and referring to Louis Farrakhan, the leader of the group Nation of Islam.

Barr went on to say that she was going to try to “correct some of the mistakes” Ocasio-Cortez has made “like costing hundreds of people decent-paying jobs ‘cause, I don’t know, they breathe carbon in the air or some horsesh*t”.

The Emmy-winning actress further claimed that the congresswoman was “paid” to promote the energy plan and accused Democrats of “decimating communities” before eventually slamming socialism as a “fake f*cking con” and a “f*cking Ponzi scheme”.

The 66-year-old then said that Dems favoured immigrants coming to the United States because “all their buddies are hiring them for less than minimum wage” and “’cause no Americans are going to vote for their a** anymore ‘cause we woke up to the sh*t you’re doing” – by which, she meant “decimating communities”.

Many people took to social media to express their attitude towards Barr’s remarks, with some seemingly sharing her point of view:

She's only speaking what we've been thinking 😉🙃

Others, however, launched an onslaught on the actress, dismissing her as “unstable” and “irrelevant”:

Dude. The second anyone says “Roseanne Barr said” we ALL need to be pic.twitter.com/t2A0zx6XVB

Why does anyone give Roseanne air time? She's clearly unstable.

Stop posting about Roseanne. She is irrelevant. Leave her that way.

In May 2018, ABC gave Barr the boot and cancelled her eponymous show after she described the Obama-era White House adviser, Valerie Jarret, as the result of if the “Muslim brotherhood & plane of the apes had a baby”.

Ocasio-Cortez Will Not Be on House Climate Change Committee
She later apologised for the tweet and said she was “so sad that people thought” her messages about Jarret were “racist”. In an interview with the Jerusalem Post, the actress said that she was fired because she is Jewish and supported Israel.

The sitcom was revived as “The Conners”, a spinoff shortly after the scandal, with the first episode revealing that Roseanne Conner had died of an opioid overdose.