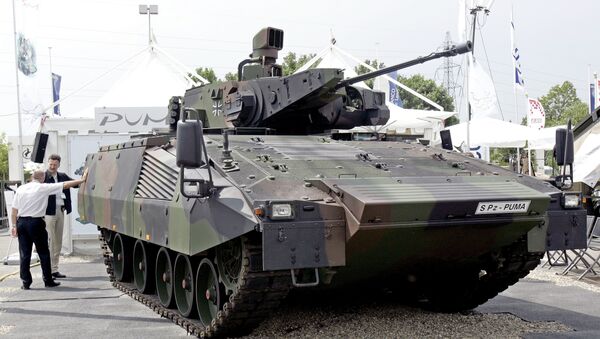 BRUSSELS (Sputnik) - Berlin has refused to lift the ban on arms sales to Saudi Arabia, despite the UK government's plea and reported displeasure of several weapons makers, including Germany's own Rheinmetall.

BAE Systems said Thursday that it was working with London to mitigate the risks to its own contract with Riyadh on Eurofighter Typhoon fighter jets. BAE, a multinational defense company headquartered in the United Kingdom, is part of a consortium manufacturing the jets. Germany is part of the consortium, alongside the United Kingdom, Italy and Spain.

In addition, last month, it was reported that Rheinmetall was planning to sue the German government over loss of revenue.

Germany announced the ban in October, amid the controversy surrounding the death of Saudi journalist Jamal Khashoggi, who was killed in a Saudi consulate in Istanbul. After two weeks of denials, Riyadh acknowledged that the journalist had been murdered and launched a probe into the case.

UK Foreign Secretary Warns Germany Over Stop in Arms Sales to Saudis – Reports
The UK government faced the calls to stop arms exports to Riyadh even before Khashoggi case came about. UK-based Campaign Against Arms Trade's (CAAT) took the government to court, citing Saudi Arabia's involvement in a campaign in Yemen, split by the civil war.

Maas suggested, at a joint press conference with his UK counterpart, that the resumption of sales would depend on the situation in Yemen.

How Arms Exports Can Help Peace

Hunt said that the United Kingdom would not impose a similar embargo. According to the UK foreign secretary, it might even have a negative effect, reducing UK influence on the ongoing Yemeni peace process.

Janice Atkinson, a UK member of the European Parliament, believes that Hunt made a good point.

"Jeremy Hunt is right: if we want to have global influence then we must be seen to be exercising this right by negotiating and trading. The Germans are yet again reneging on their NATO obligations, perhaps it's their way of pushing onwards with their own vague idea of an EU army," Atkinson told Sputnik.

"The Federal Government cannot deliver weapons to Saudi Arabia, without controlling to whom the Saudis deliver the weapons or where they use them. And supporting a deep military cooperation is out of a question," Pazderski told Sputnik.

Activist Juergen Graesslin has stressed that the anti-arms campaigners have 'repeatedly rang the alarm bell about weapons deliveries to Saudi Arabia and the Gulf states.

"We support the Churches in Germany, which have called in December 2018 for a fundamental shift in the federal government’s arms export policy. It has contributed to the humanitarian catastrophe in Yemen. The two largest German churches (the Lutheran and Catholic Church) are assigning some responsibility for the humanitarian catastrophe in Yemen to the arms export policy of the German federal government," Graesslin told Sputnik.

According to French member of the European Parliament, Gilles Lebreton, Germany and its chancellor, Angela Merkel, understand that the ban will hurt the country's weapons exporters.

"Since their natural partners, in France or the UK, but also in other European countries, will avoid any partnership with German companies, that would threaten the good end of the contracts signed," Lebreton told Sputnik.

The solution for European companies that exports arms would be to have well-defined contracts that would allow control over how the weapons are used, Lebreton suggested.