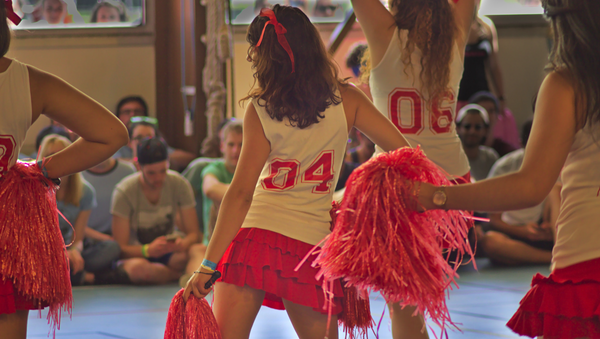 © Wikimedia Commons/Dimitri Segard
Subscribe
International
India
Africa
A Wisconsin school district official confirmed this week that coaches at Tremper High School, which is part of the Kenosha Unified School District (KUSD), will no longer be handing out so-called "gag" awards to cheerleaders based on their physical attributes.

The move came after the American Civil Liberties Union of Wisconsin sent a demand letter to the KUSD on Tuesday, urging school officials to cancel that award ceremony.

"A clear expectation has been set that awards of this nature are not acceptable and are not to be given at Tremper cheerleading banquets going forward," Tanya Ruder, a spokesperson for the school district, told the New York Times.

The ACLU's yearlong investigation recently revealed that for the past five years at an annual banquet in Kenosha, Tremper coaches have handed out awards to cheerleaders with the largest breasts and buttocks. Awards were also given for being the thinnest cheerleader.

Video footage obtained by the organization reportedly shows a Tremper coach making the remark, "We love her butt. Everybody loves her butt," as the 2018 recipient of the "Big Booty" award makes her way to the front of a room filled with more than 150 eventgoers.

Although it's unclear how old the award recipients were at the time, high school students are typically within 14 and 18 years of age.

Speaking to a concerned parent who attended the event, the ACLU found that when the "Big Boobie" award was handed to the 2018 recipient, coaches "laughed hysterically." Comments were even made on the microphone about "what a feat" it was that the cheerleader was able to execute her routines with such "enormous boobs."

‘Stereotyping'? Wisconsin Man Accused of Stealing His Own Vehicle (VIDEO)

It was also discovered that during the 2017 banquet, a cheerleader with brown hair was given a blonde wig as an award because she was deemed a "ditzy girl."

Emails obtained through an open records request show that Patti Hupp, a former Tremper athletic coach, reached out to Steven Knecht, the principal of Tremper High, on April 23, 2018, to discuss the events that took place at the March banquet.

"I feel that I need to tell you this for the protection of these girls," Hupp said. "I don't think it takes much to see that this is extremely degrading to women."

That same coach sent out another email the following day to Patti Uttech, one of the cheer coaches involved in the award ceremony. "The last thing these high school girls need is a fellow woman in their lives communicating to them that they are objects or that their appearance is something to be gawked at, demeaned, laughed at or even awarded for that matter," Hupp wrote.

Uttech claimed not to understand what the problem was.

"I honestly don't feel that I need to explain myself about how we ran our banquet," the cheer coach wrote back. "Actually, we have ran it this way for years and have never had a problem."

Four days later, Knecht sent out a letter to the cheer coaches, informing them of several complaints about the awards and saying that an investigation would be launched into the matter. However, without providing any justification, Knecht later proclaimed that he could find no evidence of wrongdoing when explaining himself to a concerned parent.

Knecht reportedly shrugged off concern over the awards, saying that they "were meant to be funny" and that the coaches were simply "joking around." But that wasn't enough, so parents reached out to KUSD officials, who did not prove cooperative.

"The District has not once provided complaining parents with written correspondence explaining its decision-making," the ACLU noted in its letter.

By the time May 2018 rolled around, a KUSD human resources official had met with Uttech to discuss what exactly occurred at the March banquet, according to the ACLU. Days after the meeting, the official directed the coach to issue apology letters to each award recipient and to submit her resignation.

The official also indicated that if Uttech wanted to advise her replacement, she needed to do so in a manner that would limit interactions with students.

Uttech, however, only sent out the apology letters. An August 2018 memo obtained by ACLU reveals that Knecht told the cheer coach that she was "welcome" to return in the following school year as a "co-coach" with her replacement.

Hupp, who later left Tremper High after her husband found a job in Kentucky, told the Kenosha News this week that she was "disgusted with the cheer coaches, and with the Kenosha parents that sat there and said and did nothing."

In regards to complaints about the school administration and coaching staff, Ruder also indicated that the district was "not at liberty to share personal matters."

The ACLU letter also focused its attention on a fellow Kenosha school, Bradford High School, where students in health class were shown a rape scene from the 1996 TV movie "She Cried No" and asked to point out what the female character could have done differently to avoid being assaulted. This incident took place in December 2018.

"This question squarely places the blame for a sexual assault on the victim, rather than the perpetrator who drugged and raped her," the ACLU said in its letter. "Under no circumstance should students be taught that the onus is on them to avoid being sexually assaulted."

The ACLU is calling on the district to institute mandatory anti-harassment training for all employees and to release its findings of its investigation into Bradford's health curriculum. It is also requesting that staff and administrators involved with the banquet be adequately disciplined.

Tremper High previously made headlines in May 2017 when a judge upheld a ruling that allowed a transgender student to use the boys' restroom despite protests from teachers and school officials. Although the district filed a petition to the US Supreme Court in August 2017, the matter eventually concluded in January 2018, after the school board voted 5-2 to settle the July 2016 lawsuit initially filed against the district.