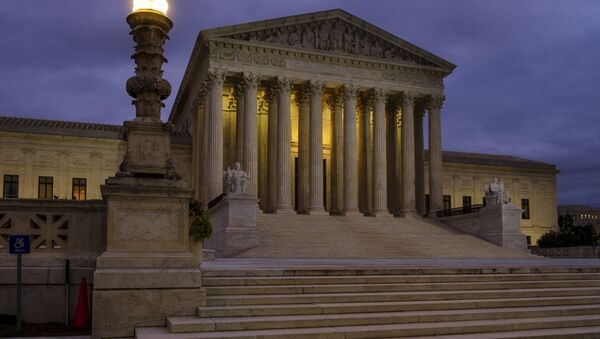 © AP Photo / J. David Ake
Subscribe
The US Supreme Court has ruled that the 8th Amendment in the US Constitution restricts the ability of police to seize all your assets, a process known as civil forfeiture.

For all the talk of a partisan Supreme Court after Neil Gorsuch and Brett Kavanaugh were appointed and confirmed during US President Donald Trump's tenure, justices concluded unanimously in this case that the Bill of Rights imposes a limit on the ability of federal authorities to confiscate private property. Specifically, the 8th Amendment gives citizens the right to be free from "excessive fines," Justice Ruth Bader Ginsburg wrote on behalf of the entire court in the decision.

"The case was a gentleman by the name of Timbs, who was arrested for allegedly selling heroin to an undercover officer. He eventually pleaded guilty to those drug charges, and the state instituted — what they typically do to criminal defendants is forfeiture proceedings. They civilly tried to obtain this person's vehicle, which they claim was used for the selling of drugs," Schlesinger told Loud & Clear hosts Brian Becker and John Kiriakou on Radio Sputnik Thursday.

https://www.spreaker.com/user/radiosputnik/supreme-court-issues-unanimous-ruling-ag
"What the Supreme Court is basically saying is that the excessive fines clause in the 8th Amendment applies to the states through the 14th Amendment — which should have been assumed and accepted for many, many years, but it doesn't work that way. The court has been applying rights from the Bill of Rights to the states in a very long and piecemeal fashion."

And while many people never see their money again, being white rather than black makes you twice as likely to have your money returned, according to the investigation.

Hillary Shelton, director of the NAACP's Washington bureau, told The Greenville News the tactic is a "dirty little secret," noting that "having cash makes you vulnerable to an illicit practice by a police organization."

Civil Forfeiture: US Man Fights Back After $11K Seized at Kentucky Airport

"Police are systematically seizing cash and property — many times from people who aren't guilty of a crime — netting millions of dollars each year. South Carolina law enforcement profits from this policing tactic: the bulk of the money ends up in its possession. The intent is to give law enforcement a tool to use against nefarious organizations by grabbing the fruits of their illegal deeds and using the proceeds to fight more crime. Officers gather in places like Spartanburg County for contests with trophies to see who can make the largest or most seizures during highway blitzes. They earn hats, mementos and free dinners, and agencies that participate take home a cut of the forfeiture proceeds," The Greenville News reported February 3.

Last week 80 South Carolina lawmakers put their names on a bill to abolish the practice in their state as well, Forbes reported. Just three states — Nebraska, New Mexico and North Carolina — have outlawed civil forfeiture on the state level.