How Canada's Own Grassroots Protest Movement is Gaining Momentum 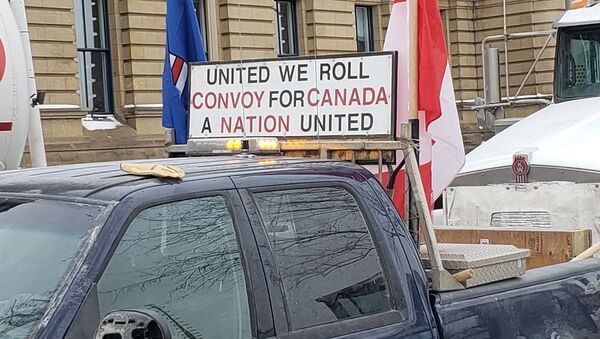 Denis Bolotsky
All materialsWrite to the author
The #UnitedWeRoll for Canada truck convoy travelled this week from Alberta Province to the capital, Ottawa, where activists held a two-day rally. Even though protesters have different political views, many wear yellow vests and most of them oppose the policies of Justin Trudeau’s government.

If you watch the coverage of Canada's #UnitedWeRoll protest one of the things that may spring to mind is how similar it looks to the 1978 Sam Peckinpah's movie "The Convoy", with dozens of trucks driving through the vast North American landscape, with people in small towns and big cities along the way cheering drivers, who turned against corrupt authorities.

Our convoy is not huge and that is what makes our plan to peaceful, work. The amount of support standing along #1 Hwy is mind boggling. Thankyou to the teachers that had their kids out to support the parents. pic.twitter.com/b0equsTRpP

​However, unlike the iconic movie with Kris Kristofferson, where the main character is on a mission against an abusive sheriff, the reality of modern-day Canadian protest is much more complicated. Canadian mainstream media almost unequivocally brand the protest as "pro-pipeline", saying that it's mainly directed against federal energy and environmental policies.

However, there are also other slogans at play, which the media prefers to either ignore or portray negatively, such as the opposition to the UN Migrant compact and calls to secure the country's borders. Politicians also seem to avoid these "hot topics".

Politicians now speaking to #UnitedWeRoll with @AndrewScheer talking pipelines and oil but dodging calls from crowd about UN and immigration #cdnpoli #ottnews pic.twitter.com/tpWMtNio2a

The Wall vs. The Hole: Trump and Trudeau are Worlds Apart on Illegal Immigration
​Faith Goldy, a Canadian right-wing journalist, who previously worked as a commentator and reporter for several media outlets and who is a strong opponent of Justin Trudeau's immigration policy, told Sputnik that #UnitedWeRoll is the first cross-country grassroots movement of its kind and its message is being often misread by both the mainstream media and MPs in Ottawa.

"I've talked to many of these protesters, and they've been explicit in their signage and their messaging that they want an end to the UN migrant compact," Goldy said. "And yet, not a single elected official who presented their remarks had included any on the topic of the UN migrant compact. So, the question becomes 'well, why?' when this is what the people are demanding."

The truckers were met with counter-protests in Ottawa for being "racist" and "white supremacists" — something they strongly deny. Their objections and explanations, however, mostly got through via alternative media platforms and social networks, rather than public TV and radio.

Migration Pact: Did the UN Intentionally Hide Information?
​Although #UnitedWeRoll is the largest, it's not the first convoy of its kind in Canada. Despite wearing yellow vests, not all protesters identify themselves with the broader "Yellow Vests" ideology. Some people, including the organisers, even try to distance themselves from the "aggressive" Yellow Vests' profile, which originated in France. But in reality, truckers from Alberta and the "Yellow Vests" seem to share many goals.

READ MORE: Trudeau Says It is Trump's Fault That Migrants 'Flee' to Canada

Cody Payant, an accountant from the city of Saskatoon in Saskatchewan Province, is a "Yellow Vests" member. He took part in similar convoys of a smaller scale in his home region earlier this year. Payant says that the movement's ideology is purely patriotic.

@PayantCody to @SputnikInt: “The Yellow Vests, basically are patriotic. They want to protect our sovereignty from being infiltrated by supernational legislation of the UN trying to supersede the Canadian law.” (Image: Cody Payant’s Facebook page) pic.twitter.com/StbLEvDUr8

​He is also an active member of Canada's People's Party and is planning to run as a candidate in the 43rd federal election scheduled for 21 October. The mainstream media recently speculated about his membership in the "controversial Yellow Vests Canada".

"The biased media is state-owned here in Canada," Payant told Sputnik. "CBC gets 1.6 billion dollars per year in tax money, so it's basically a partisan tool for liberal government right now. And it goes like that not only for liberals — also for conservatives — any party that's at power. It's state broadcasting. So, they tried to paint me, and others too, in the party, as somehow being 'risky'."

Nevertheless, Payant is optimistic about the future of Canada's grassroots protest movement:

"I know that there have been extremist groups trying to get involved in the Yellow Vests, trying to hi-jack it, to make it into something that it's not, whether it's 'Soldiers of Odin' or 'Antifa' or other groups like that. But, as a whole, I have faith in Canadians. Canadians will keep it on the tracks and overcome the hate, overcome the division and really keep it on the tracks. And I think that rally in Ottawa was really an evidence of that."

The #UnitedWeRoll for Canada convoy, consisting of around 200 semi-trailers, pickup trucks and buses, departed from Red Deer, Alberta, and travelled all the way across Canada to the capital Ottawa, where activists held a two-day rally on Tuesday and Wednesday.

The protesters are campaigning in favour of the country's energy sector, which suffers from a lack of export capacity, thy opposed to the federal carbon tax, and have expressed criticism of Justin Trudeau's immigration policy and voiced their disapproval of Canada's participation in the UN migrant compact.

The views and opinions expressed in this article are solely those of the speakers and do not necessarily reflect the official position of Sputnik.