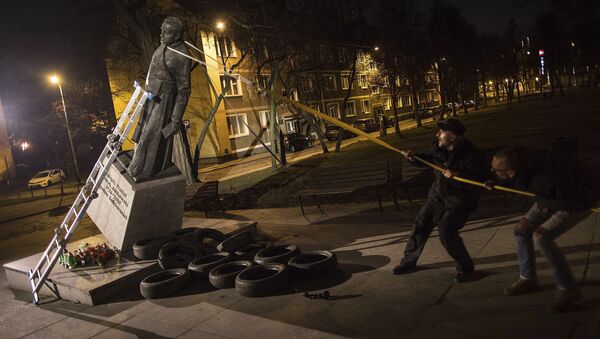 © AP Photo / Bartek Sabela
Subscribe
International
India
Africa
Activists in Gdansk, Poland, took matters into their own hands and pulled down a statue of Henryk Jankowski, a popular Catholic priest who was recently accused of abusing minors.

AP reported that three individuals, identified as Konrad Korzeniowski, Rafal R. Suszek and Michal Wojcieszczuk, brought down the statue to highlight what they saw as the failure by both politicians and religious officials to address abuses. It was not meant as an action against Catholic believers, the three said.

In a signed manifesto, the trio accused the Catholic church of "systemic complicity in the evil done to people by Henryk Jankowski."

"Driven by concern for the common good and respect for human dignity and freedom, we undertake our action in the conviction not only of its profound rightfulness, but also of its public usefulness, and as such, we summit to the community's judgment," the manifesto reads.

Video footage of the takedown, which took place at roughly 3 a.m. local time on Thursday, shows a rope being tied around the Jankowski figure's neck, and the three individuals pulling on the rope until the statue comes tumbling down onto a bed of tires.

Jankowski first became a prominent figure as a chaplain in the 1980s through his support for the Poland's Solidarity protest movement and its leader Lech Walesa. His parish church in Gdansk was often used as a meeting place for activists, and even hosted the likes of former US President George HW Bush and former British Prime Minister Margaret Thatcher, according to the Irish Times.

However, as the years passed on, Solidarity members distanced themselves from the religious figure over his nationalist and anti-Semitic views. In 2004, when Jankowski was well into his 60s, he was stripped of his parish priest position and faced various allegations of child sex abuse until his death in 2010.

Although Jankowski was never convicted of abusing minors, Polish media outlets in recent months have kicked up new allegations, citing new reports of individuals who were abused by the priest in their youth.

Korzeniowski, Suszek and Wojcieszczuk were taken into custody by local police after toppling the statue, and the area was cordoned off from the public. The statue was also covered by authorities.

City officials have indicated that they do not have any plans to erect the statue again, instead opting to leave it in storage.

According to the Irish Times, this wasn't the first time that locals have acted out against the statue. In December 2018, red paint was thrown at the sculpture after new allegations of abuse surfaced.

The statue was downed hours before Pope Francis convened a four-day sexual abuse prevention summit at the Vatican, addressing decades worth of reports that involved the abuse of minors by priests. The move has been deemed the most visible step taken by the Vatican to tackle such a problem.