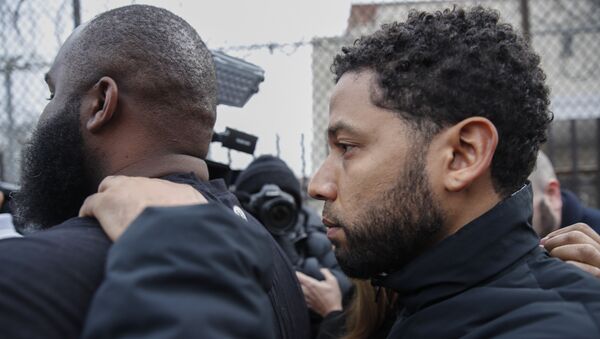 Chicago Police, after having arrested Jussie Smollett, stated that he had falsely claimed he was attacked and beaten by two masked men shouting racist and homophobic slurs because he was “dissatisfied with his salary” on the TV show Empire.

Chicago Police Superintendent Eddie Johnson said Smollett orchestrated a "phony attack" in order to take "advantage of the pain and anger of racism to promote his career."

Johnson during a news conference said that Smollett also sent a threatening racist and homophobic letter to himself at the Fox studio lot where Empire is filmed before the attack.

"I'm left hanging my head and asking why? Why would anyone, especially an African-American man, use the symbolism of a noose to make false accusations? How could someone look at the hatred and suffering associated with that symbol…how can an individual who has been embraced by the city of Chicago turn around and slap everyone in this city by making this false claim?” Johnson told reporters, adding that “bogus police reports cause real harm.”

According to the police investigation, Smollett had filed a false police report saying that he was attacked by two apparent supporters of Donald Trump, who he claimed struck him, put a noose around his neck and poured bleach over him on 29 January. Following evidence obtained by the police, Johnson said Smollett paid two men $3,500 to stage the attack, and the scratches and bruising Smollett had on his face after the incident was “most likely self-inflicted.”

Johnson said the attack "was staged, the brothers had on gloves during the (air quotes) 'staged attack' where they punched him a little, but as far as we can tell, the scratching and bruising that you saw on [Smollett's] face was most likely self-inflicted.”

'Empire' Actor Jussie Smollett Charged for Filing False Assault Report to Police
Johnson said Smollett believed the hoax attack would have been captured by one of Chicago’s many security cameras, but “that particular camera wasn’t pointed in that direction.” After reviewing hundreds of hours of video, detectives did find and release images of two people they said they wanted to question and last week picked up the brothers at O’Hare airport as they returned from Nigeria. They were taken into custody but were released after two days, with police saying they were no longer suspects, and that they had seen a “significant shift in the trajectory” of the investigation as it was revealed that one of them was the actor’s personal trainer for a music video and had appeared on Empire before.

After three weeks of mounting suspicions, Smollett, who is accused of filing a false police report, was charged Wednesday with felony disorderly conduct. The court set the bail at $100,000 and asked him to surrender his passport. His lawyers have issued a statement saying the actor “enjoys the presumption of innocence.”

Fox Entertainment and 20th Century Fox Television, the companies that make Empire, issued a statement on Thursday saying they were “evaluating the situation” and “considering our options.”

US President Donald Trump also condemned the reportedly staged attack and said: “It doesn’t get any worse, as far as I’m concerned.” He also tweeted that Smollett had insulted “MAGA and tens of millions of people” with racist and dangerous comments.

.@JussieSmollett — what about MAGA and the tens of millions of people you insulted with your racist and dangerous comments!? #MAGA