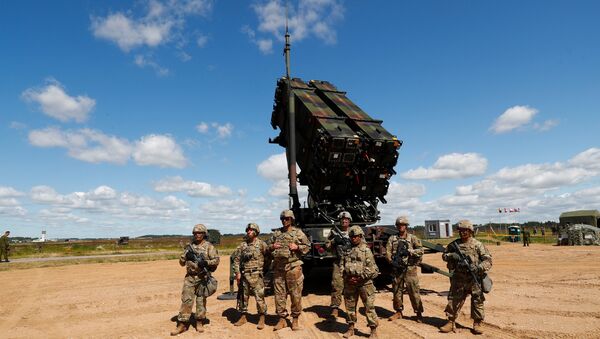 "If Europe were to accept the installation of new US missiles on its territory in this strategic environment, it would sign a suicide pact," Zepp-LaRouche said.

According to the politician, amid somewhat war-mongering rhetoric in the West, Putin "just reintroduced a reality principle and clarity" with his warnings.

"Despite President [Donald] Trump's stated intention to improve relations between the US and Russia, including that he may have one idea of replacing the INF treaty with a new agreement, Putin has to take into account the contrary intention of the neocons in the Trump administration and the British 'minister of war,' Gavin Williamson, who threatens to use 'hard power' and also claims that the 'boundaries between peace and war are becoming blurred,'" she clarified, making a reference to Williamson’s 2019 Munich Security Conference speech.

Putin: Russia-US INF Tensions 'No Reason to Create New Cuban Missile Crisis'
Meanwhile, Europe’s "fundamental self-interest," Zepp-LaRouche believed, lay in removing sanctions on Russia and re-establishing good relations with Moscow by creating "an economic zone from the Atlantic to the Pacific on the basis of integrating the Belt and Road Initiative, the Eurasian Economic Union and the EU."

She went on to note that such cooperation would create "a new security architecture" that should become the basis on which Europe builds its cooperation with the United States.

When asked to suggest ways to overcome the rifts in the global security environment between Russia and the West, Zepp-LaRouche opined that once the "real authors" of "Russiagate" — the scandal around Moscow’s alleged interference in the 2016 US presidential election, which Russia strongly denies — were revealed, "most of the strategic tensions would evaporate."

In his annual address to parliament on Wednesday, Russian President Vladimir Putin warned that Moscow would be forced to provide an adequate response if Washington, following its planned withdrawal from the Intermediate-Range Nuclear Forces (INF) Treaty, deployed missiles to Europe.

Putin stressed that Russian weaponry, in this case, could target not only areas posing a direct threat to Russia but also those areas where decision-making centers that determine and manage how the missile systems are used were located.

Putin: Russia to Take Steps if US Deploys Its Short, Medium Range Missiles in EU
On February 2, the United States formally suspended its obligations under the 1987 INF Treaty, which bans all ground-launched missiles, conventional or nuclear, with ranges of 310 to 3,400 miles, and triggered the six-month withdrawal process. Washington said it would terminate this procedure if Russia agreed to be compliant with the pact. Moscow had suspended its participation in the treaty in response to the US actions. However, Putin stressed that all of Russia's proposals remained on the table.