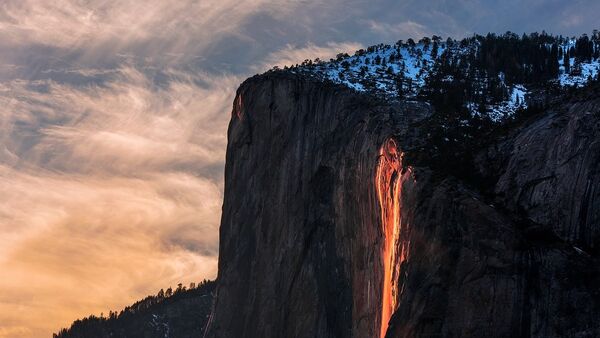 The elusive, and illusionary, natural phenomenon, which makes it appear as if lava is flowing over one of the park's snow-covered cliffs, is a rare sight, occurring for just a few minutes a day for a few days each year.

The firefall illusion, captured by nature photographers on Instagram and Twitter, comes about when light from the setting Sun hits a local waterfall at just the right angle, resulting in an orange, lava-like glow flowing down the cliff's 1,000 foot cascade. Catching the firefall can be difficult since it requires zero cloud coverage, along with sufficient snow to create runoff.

#YosemiteFireFall — Pictured, is a morning view; before I return to my bed!

⠀ The phenomenon of Firefall returns to Yosemite 🔥 Tag a friend you want to see this with! Photos from left to right: 1. @the_lost_coast 2. @alicethieu 3. @dakotasnider Always #wondermore

The rare phenomenon, which draws hundreds of visitors annually, was first recorded by California's white explorers in the early 1950s, but probably known about by the region's aboriginal population before then, according to a local internet resource on the firefall's history.

Yosemite was on fire last evening. Not literally but the setting sun shined on this seasonal fall and lit it up. Nature is grand. •••••
Thanks to David @davegaiz for sharing the amazement. ——- Have you ever seen the Yosemite fire fall in person?⁣… https://t.co/UI0NoQ6aXI pic.twitter.com/elNcdOd7UA

The event, taking place in the evenings in mid-late February, was popularised by Galen Rowell, who photographed the event in 1973.

Hiked about a mile in snow with my dog and fiancé, stood in 3 feet snow for more than an hour to witness the majestic Yosemite Firefall. Totally worth it. [OC] [3000x4000] — Arushi20 — #travel #photographyhttps://t.co/L8WZdy4vy6 pic.twitter.com/3ZQ15w1W1p

Designated a World Heritage Site in 1984, Yosemite National Park is one of the most well-known and beloved parks in the US, and is visited by upwards of 5 million people per year. In addition to the firefall, the park is known for its diversity of plant life and wildlife and its abundance of activities for visitors, including hiking, driving tours, rock climbing, skiing, and rafting, depending on time of year.