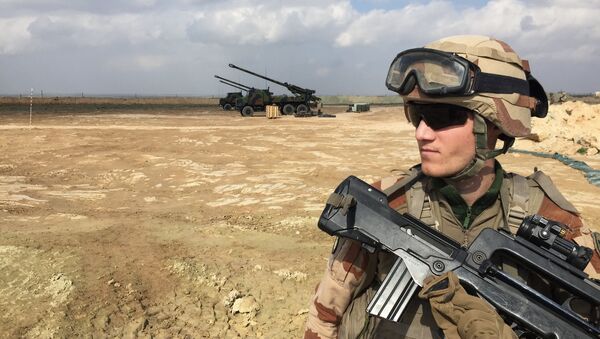 © AFP 2022 / Daphné BENOIT
Subscribe
Norway, Sweden and Denmark have already responded to US President Donald Trump's demand for Europe to take back their nationals who joined Daesh* terrorist group in Syria.

Norwegian Prime Minister Erna Solberg said that dozens of adult Norwegian militants in Syria are free to return home and face trial, adding that the country will not bring anyone from the Arab Republic proactively.

Sweden said it's prepared to integrate the fighters back into the society, which would include setting up a psychological helpline. Some 150 militants have already returned to Sweden.

US Making Every Effort to Destroy Syria - Syrian Presidential Advisor
Denmark's Michael Aastrup Jensen, foreign policy spokesman for the ruling Venstre Party, described the militants as some of the most dangerous people on Earth and insisted they are not going to take them back. In the past few years, some 150 Danish citizens have gone to fight alongside hard-line Islamist groups in Syria.

Meanwhile, Jiya Furat of the Syrian Democratic Forces (SDF) on Saturday said that they would soon declare victory over Daesh.

His statement came a day after US President Donald Trump tweeted that the caliphate was ready to fall, adding that the United States is asking its European allies to take back more than 800 Islamic State fighters captured in Syria and put them on trial.

Sputnik discussed the situation with Sharmine Narwani, a political commentator and analyst of Middle East geopolitics, who was formerly a senior associate at St. Antony's College, Oxford University.

Sputnik: How realistic is it for 800 fighters to return and adapt to a peaceful life in their home countries in Europe?

Sharmine Narwani: The United States and many western European countries made it very clear that ISIS* [Daesh in Arabic] should be targeted to kill when they were doing the strike.

I am not sure why they captured this many. Perhaps, they were [sort of been] negotiating ceasefires and sorts to have these many under arrest. Why would they not just turn over captive prisoners to the Syrian government, it makes absolute sense.

I mean this is where they committed their crime. Surely, the Syrian government is entitled to take a crack at them, you know to interrogate them, to learn from them.

22yo Syrian Charged With Gang-Raping German Girl to Face Juvenile Trial – Report
It seems that the Trump administration absolutely wants to avoid that as an option. It is a very curious one for me because clearly, most European countries will not want them back, but it is also just as clear that most Western countries do not want the Syrian government to get their hands on these ISIS members.

The wives, mothers and the children, who did not participate in combat or acts of violence I think, are probably entitled to be protected by their government. I can’t really see the reasoning behind repatriating them to their countries and obviously, they would undergo some kinds of therapies and interrogation to ensure that they are safe and not a harm to society, but I think those people are quite separate from the fighters.

However, on the fighter part, Western Europe has accepted a tonne of these former fighters. You know, you see them in Germany, the Free Syrian Army fighters. The Free Syrian Army was basically a funnel of fighters to ISIS and Al-Qaeda* and other groups and really no way to differentiate between any of the militant sectarian fighters and opposition to the Syrian government. To treat ISIS, because of the name, differently defies logic to me… they are all as guilty for conducting crimes against humanity.

I do think the families should be viewed quite separately [from] the fighters.

I recall that in late 2012, before ISIS had come on the scene and before anyone really [was] talking about Al-Qaeda in the Syrian theatre in earnest, there was an incident where two British journalists — one a photojournalist, the other a journalist – escaped capture in Syria, came back to the UK and published a piece in The Sunday Times.

And what they said was that “our captors were British”.

SDF Clearing ‘Last Daesh Village in Syria' From Terrorists – Spokesman
Two Britons were captured by other British citizens there. And so I asked the Foreign Office a series of questions and one of them was “if the Syrian government were to capture, imprison and place on trial or execute any of the British national who is participating in criminal activities against the Syrian state or its citizens, does it have the right to do so without British counsel or political intervention” and the Foreign Office said, simply: “Consular assistance is available to British nationals overseas”. But I don’t think the foreign fighters in Syria are any different now than they were then or that there are any differences between these groups.

Every country will take a different attitude towards the repatriation these people.

I do not believe ISIS fighters should be brought back into society. I think the best way to deal with them is the countries in which they went to fight and they are still physically there. They should be turned over to authorities in Syria or in Iraq.

These fighters seem to go with ease to Turkey and Syria or to Saudi Arabia, Jordan then to Syria throughout this conflict and we didn’t hear of many protests from Western European governments until refugees started flooding out of Turkey into Europe. And then suddenly there was concern about fighters.

But something very interesting for people who have been watching the Syrian military theatre is how careful the coalition forces are generally, they have targeted some of these foreign nationals, for sure. But by and large, they want to extract them from the situation and either take them to place of safety or keep them away from Syrian authority.

I am not sure why there is sort of dual standard, I mean they are fighters in that theatre, they are terrorists. The United Nations Security Council has deemed them terrorists as every state in the world believe that these are terrorists but yet they want to protect them in some odd way.

Daesh Fighters Dressing as Women to Avoid Capture by YPG in Syria – Reports
And one of the ways we have seen is when the Syrian army was cutting a swathe across central Syria and took back about 11 thousand square kilometres of ISIS territory and went right to the Euphrates, we know through one of the most highly quoted Syrian sources, opposition sources, the Syrian Observatory for Human Rights based in the UK, that coalition forces were airlifting ISIS fighters out of Deir ez-Zor enclave. And these were reportedly all foreign fighters.

You know I ran around trying to find out where these people could have gone, and I had the only person answer the question, [he] said “Afghanistan”. It is just so strange to me. Connecting some dots, there are some clear lines which mean western intelligence services and foreign ISIS fighters as we see what happened to these 400 alleged fighters under US control right now.

Sputnik: What is the likelihood of these ISIS fighters being turned over to Syria when they are in American hands already, it’s just not going to happen, is it?

Sharmine Narwani: I wouldn’t put it past Trump to suddenly put out that offer if Western Europe does not react the way he would like them to but I think he will be pulled back very quickly. There is some really good reason that these fighters are not being turned over to the Syrian government.

Fortunately, the Syrian government does have foreign fighters under custody and has interviewed them over the years but you know, ISIS fighters served a real purpose for the United States and allies in Eastern Syria, you know, the oil areas and the areas east of the Euphrates.

The Syrian army went all the way to the Euphrates, reached their target within three months. From October 2017 till now, okay, you have little groups of ISIS and about five villages in that area east of the Euphrates, which is where sort of US troops are and Kurdish troops as well – for a year and a half they have been sitting there.

The Syrian Army took back 11 thousand square kilometres of ISIS-held territory in three months. For a year and a half, a few thousand ISIS members can’t be removed. Of course, ISIS was the justification for the United States to have a military presence in Syria.

Sputnik: This young lady, Shamima Begum, she went to Syria when she was fifteen and there has been a lot of debates about how to deal with citizens who are married or [are in] relationships with the fighters in ISIS. Do you feel some sympathy towards them because obviously this young lady was fifteen, she was very much maybe cajoled and probably endeared to go there given the specific dream about the potential of the ideology, etc.? And obviously, when she got there she realised that the ideology was obviously very, very drastic and evil one in all extremes. Who is responsible for these families of these fighters, and namely the wives and children? Do you have sympathy with them?

Sharmine Narwani: Of course, when you hear the stories you have the sympathy. We know that ISIS, a lot of the terrorist groups in Syria recruited very heavily. And you know they wanted young women to come over and become wives in the new caliphate.

Assad on Groups 'Betting on US': 'Americans Won't Protect You, Syrian Army Will'
So, they preyed on vulnerable individuals and got them there and then life changed…Now I watched the interview with this young woman. It was a bit eerie and creepy because she seemed very emotionless, she seemed remorseful.

It seemed that she needed to undergo some therapy. Ultimately, she is a British national and that is her citizenship and she has the right to return to her country. And she did not herself participate in violent criminal activities, as far as we know.

So that needs to be ascertained, again, through the interrogation process, psychologists etc.

But I do think once European countries have obligation to take back these people, I can’t imagine how they can circumvent the logic of that, unless of course they change laws. But I don’t see that happening with sort of women and children. I think they will eventually be repatriated because they have nowhere to go.

*Daesh (also known as ISIS/ISIL/Islamic State), al-Qaeda are a terrorist group outlawed in Russia and many other countries.