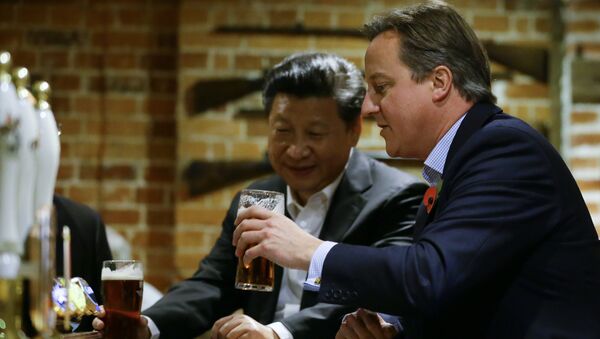 Demond Cureton
All materialsWrite to the author
Brexit could make the UK vulnerable to Chinese meddling, according to a report from the Royal United Services Institute. The report also warns that Beijing will use multiple means to infiltrate the UK's institutions.

The RUSI report, titled "China-UK Relations: Where to Draw the Border Between Influence and Interference?" speculates that Britain should create a cohesive programme to counter China's influence.

Beijing's "concerted strategy" ranges from increasing its technological reach via multinational corporations like Huawei and using advisors to instigate an "elite capture" in other countries, the report alleges.

Asia
Expect China to Invade Taiwan, Okinawa in Near Future - Retired Japanese General
The report urges the UK government to develop "systems to prevent non-transparent financing of political activities and lobbying by CCP-backed individuals and organisations", adding that "the ultimate donor should be clear, even when monies are channelled through British citizens."

Many Western countries have accused China of using its Belt and Road Initiative to expand its influence across Asia and Africa, despite the UK forging an alliance with the project during former UK prime minister David Cameron's administration via a £50mn private fund in 2017.

"The case of former British prime minister David Cameron, who is involved in a large China fund which aims to invest $1bn in BRI projects, has gained some attention," the report postulates.

"The question of ‘elite capture' by the CCP has not been closely examined. It should be, including the issue of how much time should elapse between government service and working for Chinese state or quasistate organisations."

Former UK diplomat and architect of the report Charles Parton, said that "the UK's departure from the EU may increase the Chinese Communist Party's desire to interfere, as it seeks to implement further a divide-and-rule strategy, aimed at imposing its global vision and promoting its interests".

The report also compares Moscow to Beijing, stating that Chinese interference is "not of the Russian kind" which is "more deliberately hostile, even destructive".

"It is more subtle, incremental and often under the radar, although it is occasionally brazen," the report alleges.

Beijing instead advocates a "ruthless advancement of China's interests and values at the expense of those of the west, including through actions which encourage self-censorship and self-limiting policies", the report said.

The report does not source specific examples, but urges great caution in China's participation in the UK's national infrastructure, citing Huawei's 5G technologies.

"Were there to be a decision in favour of allowing Chinese operator Huawei to offer fifth-generation mobile networks [5G] in the country it would be ‘at best naïve, at worst irresponsible," the report states. "This is not least because [Chinese] national security laws require Huawei's Chinese staff to accede to requests from government departments."

"The UK needs to realise that behind the enticing, but essentially meaningless, language of ‘win-win' or ‘shared future for mankind' lies a ruthless CCP agenda to advance its and China's interests," the report asserts.

Brexit to Bring Security Issues, UK Gov't Anxious About Arrangements – Scholar
It also states that the UK must "channel it into a genuinely balanced relationship" and that the "UK should not allow it to cloud its perceptions", adding that "the UK's goal must be genuine reciprocity and an equal, mature and comprehensive relationship."
Newsfeed
0
Access to the chat has been blocked for violating the rules . You will be able to participate again through:∞. If you do not agree with the blocking, please use the feedback form
The discussion is closed. You can participate in the discussion within 24 hours after the publication of the article.
To participate in the discussion
log in or register
loader
Chats
Заголовок открываемого материала