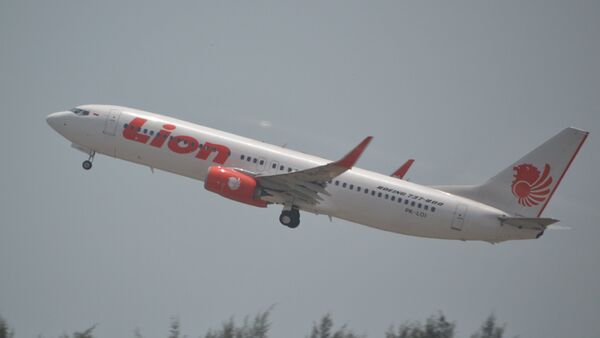 CC BY-SA 2.0 / Alec Wilson / PK-LOI
Subscribe
International
India
Africa
A large scorpion was spotted crawling out of the overhead luggage compartment on a Lion Air flight from the Indonesian province of Riau to Banten on February 14.

The footage of the crawling scorpion, which is circulating on social media, was recorded by one of the passengers.

​"When the plane had landed, one passenger was taking their things out of the compartment, that's when suddenly the scorpion appeared above our seat. I was in row 19 with two other passengers, an elderly married couple. When we saw the scorpion above our heads, we rushed out as fast as we could," passenger Karim Taslin told the Strait Times.

By the time the crew members responded to Taslin's request for help in catching the scorpion, the creature had already escaped from their sight.

According to witnesses who spoke to the International Business Times, the arachnid appeared to be a venomous Asian forest scorpion, one of the most aggressive varieties, which is usually found across tropical and subtropical southeastern Asia, including Cambodia, Laos, Thailand, Vietnam, India, Sri Lanka, Nepal and China.

In a statement to UPI, Lion Air spokesperson Danang Mandala Prihantoro said, "Ground service officers and technicians immediately carried out an in-depth search and thorough handling of the aircraft after the passengers and cargo were removed, but no animals were found."