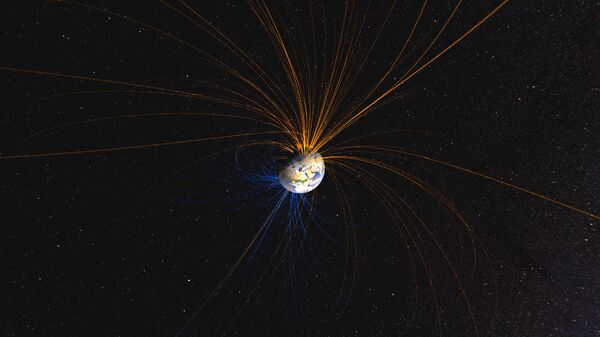 CC BY 2.0 / NASA Goddard Space Flight Center / Dynamic Earth - Earth’s Magnetic Field
Subscribe
International
India
Africa
Ilya Tsukanov
All materialsWrite to the author
Earlier this month, scientists from the US National Oceanic & Atmospheric Administration were forced to update the coordinates of the magnetic North Pole ahead of schedule after finding that it was moving away from the Canadian Arctic and towards Russia's Siberia at a rate of over 55 km per year, up from less than 15 km per year two decades ago.

The faster-than-normal movement of the magnetic North Pole has led to intense speculation on how the phenomenon could affect humanity, with Sputnik discovering that, generally speaking, people will probably remain generally unaffected, while wildlife may suffer due to their dependence on the polls' magnetic fields for navigation.

More significant, however, is the prospect of the accelerated pole movement eventually leading to Earth reversing polarity and the magnetic poles swapping places, a possibility that scientists have brought up in discussions of the present tug of war between magnetic field patches in northern Canada and Siberia.

Science & Tech
LISTEN to CREEPY Water Drum-Like Vibration of Earth's Magnetic Field
In a commentary piece on the subject for the New Zealand Herald, veteran Canadian journalist Gwynne Dyer wrote there's probably no need to panic at the prospect, with the Earth's magnetic field already reversing polarity "at least 183 times before, according to the geological record."

When it happens again, Dyer assured, "it will now be the other end of the needle that points to magnetic North, but the magnetic field will still fulfil its primary function of trapping the high-energy particles that would otherwise bathe the planet's surface in radiation."

One possible problem pointed out by scientists studying the matter is that the transition, which could take as much as a thousand years to complete, would dramatically weaken the magnetic shield sparing Earth from deadly solar and cosmic radiation, with the strength of the planet's magnetic field falling to as little as 5-10 per cent of normal levels.

"If the ozone hole worried you a bit, this should frighten you to death – and the strength of the magnetic field is already falling," Dyer wrote.

The journalist quickly added, however, that "the consensus among scientists is that the surface of the planet is not bombarded by hard radiation during the intervals when the Earth's internally generated magnetic field all but disappears for a time. Instead, the solar wind itself induces a magnetic field in the extreme upper limit of the planet's atmosphere (the ionosphere) that stops incoming high-energy particles from reaching the surface."

Science & Tech
US Geologist REVEALS How Fast-Shifting North Magnetic Pole Will Affect Humanity
Indeed, according to Dr. Andrew Roberts, an Earth scientist and co-author of a recent comprehensive study on the subject of magnetic poll reversal, the weakening won't be enough to threaten life on Earth, with life surviving multiple reversals in the past.

However, Roberts added that if past events, such as solar flares or solar wind storms, are anything to go by, the increased probability of super-hot supercharged energy blasting toward Earth due to a weaker natural magnetic shield may cause extensive damage to manmade electrical infrastructure, from spacecraft and satellite instruments in near-Earth orbit to entire power grids on Earth itself.

A 2011 report by the US National Academy of Sciences found that if a severe event like the 1859 solar storm which shorted telegraph wires and caused random fires across North America and Europe were to be repeated today, it could cost up to $2 trillion in initial damage, and take up to a decade to repair.

Regarding this possibility, Roberts wrote "hopefully, such an event is a long way in the future and we can develop future technologies to avoid huge damage."