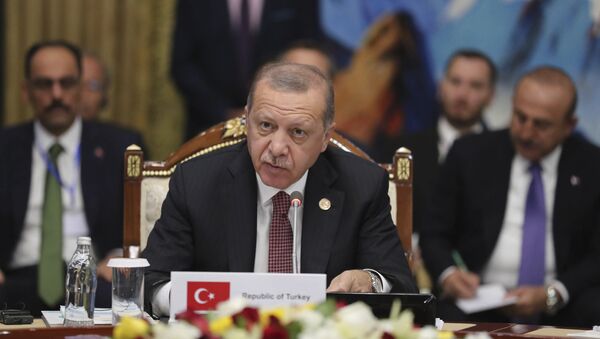 "Turkey has all the new ambitions to occupy other people's land. I think we are facing Erdogan who has dreams of reinvigorating and recreating the Ottoman Empire. I don't think he will be able to do that because our people are there to defend our land and to defend our country, and to defend the sovereignty of our county," Bouthaina Shaaban, the adviser to Syrian President Bashar Assad on political and media affairs told reporters.

His comment comes after in late January, Erdogan announced after a phone conversation with his US counterpart that Donald Trump had proposed to establish a 30-kilometre (19-mile) buffer zone in the north of Syria. According to Erdogan, the future security zone should be controlled by the Turkish military.

In January 2018, Turkey launched a military operation in the northwestern Syrian city of Afrin against the US-backed Kurdish People's Protection Units (YPG), which is regarded by Turkey as an affiliate of the Kurdistan Workers' Party (PKK), listed as a terrorist organization by Ankara.

At the peak of its power in the 15th and 16th centuries, the Ottoman Empire, also known as the Turkish Empire, controlled vast territories in Western Asia, including modern Syria, along with Southeast Europe, parts of the Caucasus, Arabian Peninsula and North Africa. The empire collapsed in the 1920s after over six centuries since its emergence.

Commenting on the provision of autonomy to the Kurds, Shaaban said that this would lead to the partition of Syria, an impossible prospect given that the country was a "melting pot" of various religious and ethnic groups that are provided with equal opportunities.

"Autonomy means the partition of Syria, we have no way to partition Syria. We have Armenians, we have Caucasians, we have Turks, we have Muslims, we have Shiia, we have Druze, Christians — you name it. Syria is a melting pot for all people, and all people are equal in front of the Syrian law and Syrian constitution," Shaaban told reporters, asked about the possibility of Damascus granting autonomy to the Kurds.

Erdogan Dissatisfied With US Reluctance to Jointly Produce Patriot Systems
Last December, Erdogan announced that Ankara was ready to launch another offensive against the Kurdish militia, this time in Manbij, then controlled by the YPG, however, the Turkish leader later said that the operation had been postponed following his phone conversation with US President Donald Trump, who announced the withdrawal of US troops from Syria after the call.

Damascus categorically opposes the presence of either the Turkish or US military on Syrian territories to the east of the Euphrates River.

In March 2016, the Syrian Kurds unilaterally declared the creation of a federal region in the areas they controlled in the north of the country. The declaration was dismissed by the Syrian government, which said that it had no legal basis.