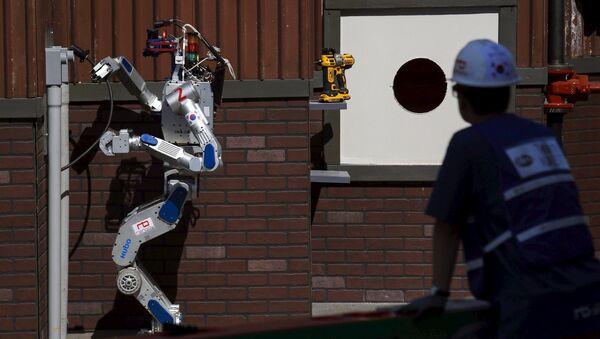 The Department for Advanced Research Projects Agency (DARPA) is seeking technologies to connect troops' brains with an unknown range of "military systems," Defense One reported Monday.

If humans can control prosthetic limbs like they do natural ones, and researchers can give deaf people tools to translate their thoughts into tweets, perhaps the notion of controlling a machine solely with the mind is a natural progression. But when that machine has the ability to take a life, the consequences of this technological leap become infinitely more complex — because a machine with artificial intelligence could develop memories of how to kill humans, and act on them.

Humans have long wielded killing machines — look no further than the standard M-16 or AK-47 for that. Now, AI and other developments are paving the way for a new modality: soldiers who can fight in the physical realm with just their thoughts, not their trigger fingers.

The difficulties of developing such technology are substantial. For one, the brain is constantly rewiring itself, and brain cells are constantly dying and being generated — making it hard for the AI and machine side of things to get consistent commands from the right side of the human brain, Defense One notes. DARPA said in a solicitation to the industry that AI offers some capabilities for dealing with this, since an AI system could recalibrate itself as the brain makes its own changes.

Regardless, telepathy is no longer a subject for a few fringe conspiracy theorists or visionary science fiction authors.

At least at this stage of research, there are significant developments suggesting that in order to wield these technological tools, humans will have to experience physical changes, too.

One group of researchers at DARPA is building an "AI-powered interface" that sends neuro-electrical "artificial signals" to stimulate certain parts of the nervous system. The system would be able to make a person feel like they are burning when they are not physically burning, or create a sense of touch when a person isn't physically being touched.

The goal of this system, which would fuse to the upper torso, would be to "maximize information content" carried on the body's electrical railroad tracks — your nerves. Human nerves have a limited capacity of how many electrical signals can flow through at a given point in time — DARPA's AI system would augment the central nervous system to handle more electrical inputs and outputs, potentially allowing a greater connection with a machine interface.

Teams are competing for prizes up to $1 million under the program, which is basically a full-fledged effort at making telepathy useful for US troops. There will be a day for research teams to show off their ideas to DARPA staff on March 5, according to a solicitation posted online by DARPA.

DARPA previously completed a project to allow a human to communicate with a swarm of drones telepathically as well. Something about telepathy is apparently very interesting for the US military, but it's anyone's guess how well these futuristic technologies will translate to the tasks soldiers actually have to perform.