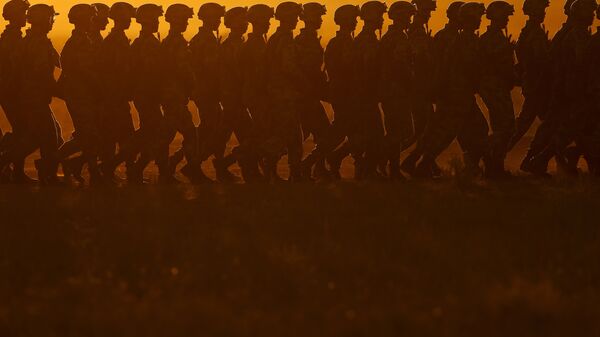 Orita first made the comments in January 2019 and has since expanded on them, telling military website Stars & Stripes that China's interest in expanding its influence in the region will begin with Chinese officials declaring a no-fly zone around Taiwan.

Although the island nation is self-governed, China has long thought of Taiwan as a wayward territory that needs to be brought back into the fold.

Following the no-fly zone declaration, Orita said Beijing's military tactics will involve its servicemembers attacking Taiwan's navy and air force on land and in the Taiwan Strait, and then implementing a blockade to force the island's government to negotiate the process for installing a "pro-Beijing regime."

"After taking over Taiwan, China will gain more influence over Indo-Pacific shipping lanes, then China can start to add nuclear pressure on the countries in the Pacific," Orita told the website. He predicted that after China controls Taiwan, it will move to solidify its claims on disputed islands in the South China Sea, taking over the Senkaku Islands and building a naval port on the Scarborough Shoal.

"By building up their forces there, it will add tremendous pressure on surrounding countries," he explained.

Once China has established its footholds in Taiwan, the Senkaku Islands and the Scarborough Shoal, it'll focus its attention on removing the US presence from Japan's 70-mile long Okinawa Island, which houses thousands of US servicemembers.

According to Orita, Beijing will force the US from Okinawa by "fostering negative media coverage and supporting the anti-US military protest movement" that has resulted from years of military mishaps and violent crimes committed by American soldiers.

Orita backed up his predictions by citing sources he says have told him China has been "dumping money to influence Okinawa to turn its back on its country."

"We are willing to create a vast space for peace unification, but we will never leave any room for any sort of Taiwan independence or separatist activities," Xi said. "We do not promise to renounce the use of force and reserve the option to use all necessary measures."

Taiwanese President Tsai Ing-wen rejected Xi's statements, and later moved for a new round of military drills to practice defending the island nation from a potential invasion.

Orita is not the only one predicting a rapid timeline for conflict between China and Taiwan. Ian Easton, a research fellow at Project 2049 Institute, told Global News in January that the chances for a military victory for China in Taiwan would be much higher within the next "five to 10 years."

"The farther forward you project, the more likely it becomes that there will be a military crisis in the Taiwan Strait," Easton told the outlet. "[China is] building up all the capabilities that they would need to launch a potential invasion of Taiwan at some point in the next decade."