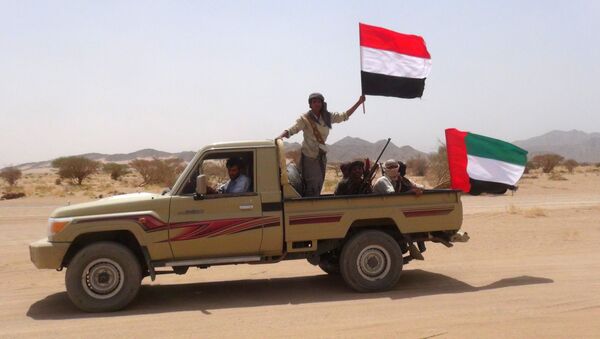 © AFP 2023 / Nabil Hassan
Subscribe
International
India
Africa
MOSCOW (Sputnik) - Representatives of the Yemeni government and the Houthi rebels from the Ansar Allah movement made significant progress in the talks, agreeing on the first phase of redeploying military forces during the fourth joint meeting on February 16-17, the press office of the UN Secretary-General said in a statement on Sunday.

"After lengthy but constructive discussions facilitated by the RCC [Redeployment Coordination Committee] Chair, the parties reached an agreement on Phase 1 of the mutual redeployment of forces", the statement says.

The parties have also reached some agreements on the second phase of forces' redeployment, it added. "The next RCC is expected to convene within a week with the aim to finalize an agreement on Phase 2", the statement says.

Yemen has been engulfed in a violent conflict between the government headed by President Abd Rabbuh Mansur Hadi and the Shiite Houthi movement, also known as Ansar Allah, backed by army units loyal to former President Ali Abdullah Saleh, for several years.

Saudi-Led Coalition Launching Operation in Yemen's Sanaa - Reports
The Saudi-led coalition has been carrying out airstrikes against the Houthis at Hadi's request since March 2015.

The intense fighting between the two sides resulted in one of the world's most acute humanitarian crises, with about 22 million people in Yemen currently in need of some form of humanitarian assistance or protection, according to UN figures.

In December, during the first round of UN-led consultations in Sweden, the warring parties to the Yemeni conflict agreed to a ceasefire in the port city of Al Hudaydah, as well as an exchange of prisoners and establishment of humanitarian corridors in the area.