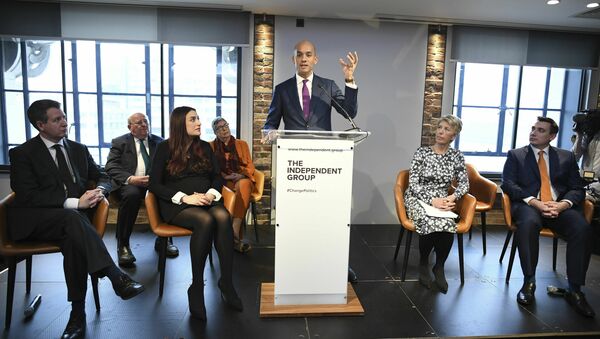 © AP Photo / Stefan Rousseau
Subscribe
International
India
Africa
The MPs addressed the press and announced their resignations on Monday, and have opted to form the new Independent Group. The parliamentarians have accused Labour of antisemitism as well as losing sight of its origins as a "broad church" of left-leaning politicians, forcing some of its members to become "politically homeless".

"British politics is now well and truly broken," Mr. Leslie added. The MP for Nottingham East also accused Labour of being "hijacked by the machine politics of the hard left".

MP Ann Coffey said that she had joined Labour 41 years ago and thought she would remain there the rest of her life, but did not believe that political parties were "an end in themselves".

"Labour has lost sight of this and is no longer a broad church," Mrs. Coffey said, adding that antisemitism had been "rife and tolerated" by Labour, in addition to Labour and opposition leader Jeremy Corbyn changing the party "beyond recognition".

Former Labour MP Angela Smith said that while she comes from a working-class background, she believes that people do not want to be "patronised by left-wing intellectuals" that believe being poor "constitutes a state of grace".

"I am sickened that Labour is now a racist, antisemitic party and furious that Jeremy Corbyn is enabling Brexit," MP Mike Gapes said, adding that Mr. Corbyn is on the wrong side of "so many international issues" such as Syria, Russia, and Venezuela.

"Too many people face barriers to reaching their potential," MP Chuka Umunna said in his resignation, adding that "it doesn't have to be this way".

"The established parties can't be the change because they have become the problem," Umunna said whilst accusing Westminster of failing to fulfil their duty with competence. He also told other MPs from all affiliations to join the Independent Group, stating that MPs should "Leaving the old tribal politics behind, we invite others who share our political values to join us".

How Has The Labour Party Responded?

Jeremy Corbyn said in a Monday press statement that he was "disappointed" that the seven MPs have felt unable to continue working together for Labour policies ​which have "inspired millions at the last election and saw us increase our vote by the largest share since 1945".

“Labour won people over on a programme for the many not the few – redistributing wealth and power, taking vital resources into public ownership, investing in every region and nation, and tackling climate change," Mr. Corbyn said.

“The Conservative Government is bungling Brexit, while Labour has set out a unifying and credible alternative plan," Mr. Corbyn added. "When millions are facing the misery of Universal Credit, rising crime, homelessness and poverty, now more than ever is the time to bring people together to build a better future for us all.”

Angela Rayner, Labour MP for Ashton-under-Lyne, said that the seven MPs were "wrong to do so" and that Labour should concentrate on removing the "wretched Tories from power" in addition to having a Labour government that worked "for the many not the few".

"We must not be detracted from removing the Tories that's our aim," Ms. Rayner said.

A Labour source added: “These MPs stood under Jeremy Corbyn's leadership on a manifesto the whole party united around and saw their votes increase. Now they are standing for different policies and on a different platform, they should resign and put them to the test in a by-election.”

The Labour party has faced mounting pressure on its Brexit and antisemitism stances, with Mr. Corbyn writing to UK prime minister Theresa May offering support to her Brexit deal if she adhered to five legally-binding commitments, including a "permanent" custom's union, after the Prime Minister's Brexit plans were crushed 432-202 in a historical defeat on 15 January.

Labour has also been accused of rampant antisemitism by centrist Labour MPs and Conservatives, among others. MP George McManus was forced to apologise in August 2018 for accusing Labour deputy leader Tom Watson of being on the payroll of "Jewish donors" in a Facebook post.