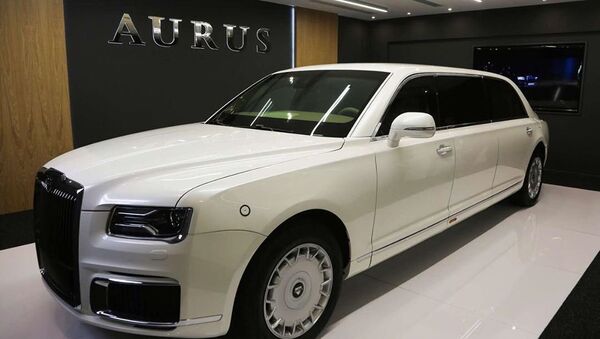 © Photo : zvezdanews/instagram
Subscribe
Despite having been unveiled last year, development and testing related to the Kortezh project series of luxury vehicles is continuing. Earlier, an Aurus limo was spotted driving around a Siberian town in temperatures as low as -50 degrees Celsius.

Russia's Zvezda television channel has released fresh footage showing off the interior of an armoured Aurus limousine at the IDEX-2019 expo in Abu Dhabi.

The video shows a Zvezda correspondent familiarising himself with the creature comforts available to both the driver and passengers of the presidential-class vehicle, with interior accents made of real wood accompanied by cream-coloured leather.

The driver is treated to two multimedia screens on the dash board, with one placed directly behind the steering wheel like a traditional dash cluster, and the other in the centre of the dash. In the rear, one finds additional monitors, including a small one in the centre console, as well as a large big screen TV-like monitor at the partition separating the driver from the rear passenger area. To either side are two window-like monitors with cameras showing what's going on outside the vehicle at all times.

Not Just for Presidents: 'Aurus' Cars to Be Produced for Russian Civil Service
"I don't want to get out," an expo attendee told Zvezda's correspondent. "I'd prefer to stay in here and drive somewhere…Very comfortable," he added.

The uniquely coloured white Aurus Senat limo is the second to be seen by the public in recent weeks. Earlier this month, a white Senat was spotted driving around the small Yamal town of Noyabrsk, about 2,300 km northeast of Moscow.

Last week, Russian Minister of Industry and Trade Denis Manturov confirmed that Russia had planned to localise the production of Aurus-brand vehicles at the Tawazun industrial park in the UAE.

The Kortezh series of state vehicles was officially unveiled at President Vladimir Putin's inauguration ceremony last May. In addition to 'Senat' limousines and sedans, the series includes an 'Arsenal' minivan, with work underway on a Kommendant SUV, as well as a motorcycle being developed under the Izh brand. Last November, Sollers, owners of the Aurus brand, said that the civilian variant of its Aurus vehicles had been sold out for the next two years.