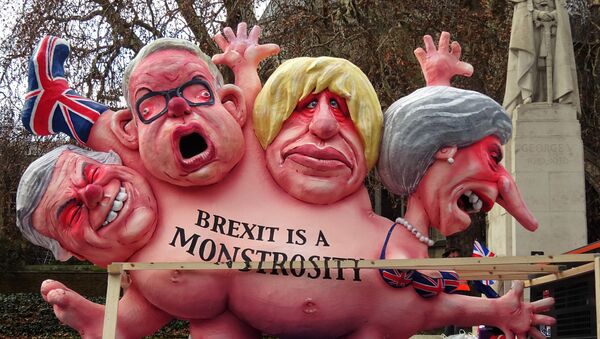 Nigel Farage may be facing serious competition from the likes of a UK multimillionaire financier who backs a no-deal Brexit and who vowed to campaign for it if a snap election is called.

Jeremy Hosking, who's donated generously to ‘Vote Leave' and Conservative Party, has registered a pro-Brexit party — Brexit Express — and said that the only way to do it right is to have a clean split from the European Union.

"Brexit Express expects that many new parties will likely be formed in 2019 should it become clear that the main parties are, in fact, Remain-junkies determined to thwart the Brexit which so many of us voted for and, in the case of Labour and the Conservatives, in defiance of their own manifesto promises," the financier said.

Amid rumours that the Conservative Party will eventually split over the Brexit strategy pursued by its leadership, a number of solutions have been offered by pro-Brexit forces in and out of Westminster.

"Can these unhappy spouses co-exist in the same political party? The best form of defence is attack. We don't necessarily want the Tory party to split, but it seems to me that there is a good case for it," Hosking argued.

In addition to Brexit Express, a new party registered by the former UKIP leader Nigel Farage aims to bring "real clarity" on the issue of Brexit, as the political elites are trying to stop it.

The eurosceptic European Research Group (ERG), whose members are staunch Tory Brexiteers, such as Jacob Rees-Mogg, has been viewed as a significant influencer on Theresa May's position in the government.

"Brexit delayed would be Brexit denied," said Rees-Mogg, accusing the government of straying away from the manifesto of the 2016 referendum.

Jeremy Hosking, who donated £1.7 million to Vote Leave in the Brexit referendum of 2016, similarly criticized the outcome of Brexit negotiations, led by Mrs. May.

"Without No Deal we either cannot leave the EU at all, or can only do so on egregious terms. The truth of the latter is demonstrated by the agreement the so-called negotiations produced, which are little short of a prohibitively expensive national humiliation. In the opinion of BE, it's time to sing the praises of No Deal, both as an outcome and as a negotiating tactic. This campaign will do this, whilst retaining (hopefully) our sense of humour," Hosking said.

While the warring faction within the Conservative Party keep disagreeing on the country's Brexit route, the opposition led by Labour's chief Jeremy Corbyn has also suffered a fresh crisis.

On Monday, seven Labour MPs resigned from the party, accusing it of anti-Semitism, to form The Independent Group. The decision that left Corbyn "disappointed" also raised a number of questions on how this group of MPs will vote on Brexit in the upcoming parliamentary sessions.