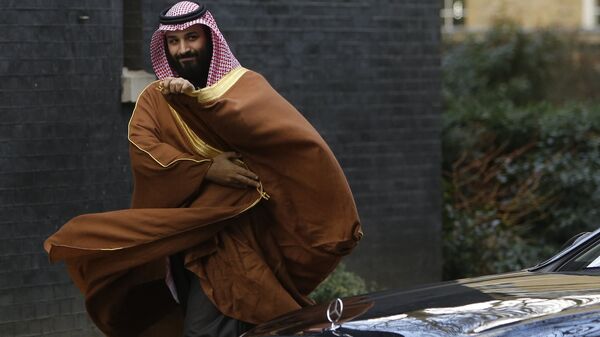 Upon his arrival at the Pakistani Noor Khan air base, the Saudi crown prince was welcomed by Pakistan's Prime Minister Imran Khan, according to the Saudi Gazette. During the visit, Saudi Arabia and Pakistan are expected to sign a number of investment agreements, including for a $10-billion refinery and petrochemicals complex in the coastal city of Gwadar, the newspaper reported.

Pakistani Foreign Minister told Sputnik on Friday that he hopes Saudi crown prince's visit would bring more investments to the country. The senior diplomat praised a long history of Saudi-Pakistani political relations, adding the two countries had been supporting each other at the international level and suggested that Pakistan could help mediate the Saudi-Qatari spat.

Pakistan, Saudi Arabia Launch Second Stage of Joint Naval Exercises
The Dawn newspaper reported in December that the State Bank of Pakistan received a $1 billion deposit from Saudi Arabia, which is part of a pledged $3 billion in bailout money aimed at addressing the nation’s balance-of-payments crisis. The media outlet, citing the Pakistani bank official, said that the next tranche of bailout money would come soon. Riyadh also reportedly promised Islamabad deferred payment facility for oil import worth up to $3 billion.

In May 2015, media reports emerged claiming that Saudi Arabia had allegedly made a move to purchase nuclear weapons from Pakistan. However, a Pakistani senior official has told Sputnik that Islamabad does not have any alleged agreements on nuclear cooperation with Riyadh, stressing that "most such reports emanate from New Delhi".

The crown prince is expected to conclude his Asia tour with a China visit on Friday.