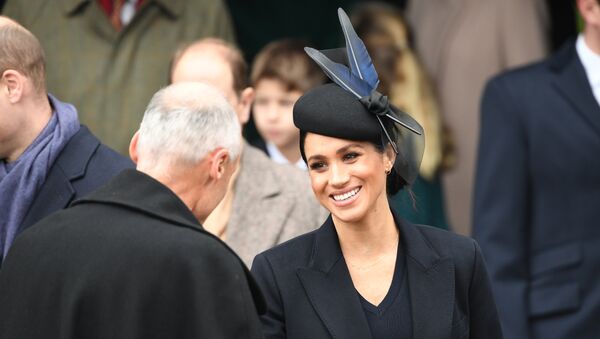 © AFP 2021 / Paul ELLIS
Subscribe
In January, Kensington Palace announced that the Royal Family's newest member, Meghan Markle, became the patron of four organisations - the National Theatre, the Association of Commonwealth Universities, The Mayhew, and Smart Works. They were all chosen as "causes and issues with which [Meghan] has long been associated".

The 37-year-old Duchess of Sussex has voiced her support for a campaign by black academics and students that aims to "decolonise the curriculum" in the UK.

Meghan Markle’s Friends Fear ‘Emotional Trauma’ Can Affect Her Baby – Reports
The movement seeks to "confront the legacies of the empire", the "male, pale and stale" professors in order to ensure there is diversity among those on campuses.

When Meghan Markle became Patron of the international organisation Association of Commonwealth Universities (ACU) in January, she expressed surprise at the low diversity of professors in the UK, British media reported.

According to the media, when the newly-minted royal saw the statistical report, she exclaimed: "Oh my God!"

"She was really surprised, she was like 'oh my god, really, we need to get a photograph of this", a supporter of ethnic minorities and female staff at Manchester University, Dr Rachel Cowan said.

For instance, data from 2018 by an Equality and Higher Education staff statistical report showed that out of 14,205 male professors, more than 12,000 were white and only 90 were black.

Many social media users expressed their frustration with the fact that Meghan had waded into politics and suggested that the Royal Family should steer clear of any political movements and actions:

I’m not contesting the issue that there may be a disproportionate disparity in the ethnic make up of many of our universities but Meghan, please just keep out of political issues. https://t.co/IA2JWOcIRB

If this is true I don't give the British royal family long. They need to stay out of politics not dive into the culture war. https://t.co/x9TSwRZVvq

royalty should not venture into anything political…dangerous

Others said that a person should be hired based on his/her merits regardless of race, gender, or sexual orientation:

Why should they get jobs in the universities just because they are black? They should only get the jobs if they are the most suitable candidates for the posts with regards to their education and work history and not because of the colour of their skin

For God's sake stop this ludicrous thinking. Recruit on merit whether they be black, white, yellow, gay, straight…. MM and those that think like her are driving a wedge and creating mistrust. #MeghanMarkle

Some said that the concept of the movement was itself "racist":

Wouldn’t that be a kind of racism in itself??🤔

Claiming to be fighting an imagined 'racism' with racism!

The movement was deemed controversial when students took to the streets of Oxford in 2016 in an bid to have the statue of Cecil Rhodes, the 19th Century colonialist and slave owner, removed from one of Oxford University's colleges.

Meghan Markle's Pregnancy Made Prince Harry 'Anxious', Body Language Expert Says
One of the campaigners said Rhodes was "responsible for all manner of stealing land, massacring tens of thousands of black Africans, imposing a regime of unspeakable labour exploitation in the diamond mines and devising proto-apartheid policies".

During her visit at City, University of London, in Islington in late January, Meghan encouraged scholars to "open up the conversation" about curriculum in British universities in order to avoid "continuing with the daily rote" because "sometimes that approach can be really antiquated and needs an update".

"Many of the issues around racial equality are similar and it is great to see her embrace this. Change is long overdue", Meera Sabaratnam, who leads the campaign to decolonise the curriculum at universities in London, told The Sunday Times.