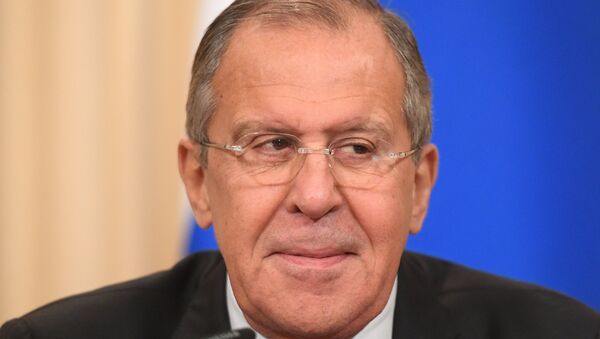 Russian Foreign Minister Sergei Lavrov never hesitates to show tongue-in-cheek wit while responding to tons of questions from journalists, and his presser at the Munich Security Conference was no exception.

"Here's a follow-up question on Syria. This comes from Josh Rogin of The Washington Post, I'll read it out: 'Russia is now the security guarantor of Syria'. And he adds, 'Congratulations'", the host of the conference said with a chuckle. "'How will you, Russia, how will you ensure the Assad regime stops threatening the region and stops committing atrocities against their own people?'"

But the head of Russian diplomacy is not the kind of man who is easily caught off guard: he came up with a somewhat unexpected response, which led to an outburst of laughter and applause from the audience.

"Well, I think whatever I answer, you will write what you want. So do it", Lavrov hit back.

When asked about the possible buffer zone involving the United States and European countries, Lavrov slammed drawing any new players into a possible northern Syrian buffer zone, which has been proposed by President Donald Trump, as counterproductive.

"US President Donald Trump will create a buffer zone in the north of Syria, and it is difficult for me to comment on this… Various plans of countries that are illegitimately on Syrian territory, especially plans to involve even more illegitimate players there, as I see it, do not really help".

The foreign minister further emphasised that the staged nature of the footage of an alleged chemical attack in Syria's Douma had always been evident.

"I think the West understood all this from the very beginning, because some Western countries staged these provocations, including through the infamous White Helmets, which is a humanitarian organisation headed by a former MI-6 employee", Lavrov stated.